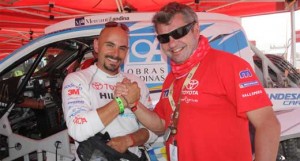 The start of the Dakar 2013 was announced very difficult by David Castera, and this information has been confirmed by all competitors! This third stage brought drivers and riders to Nazca through a very complicated erg and tracks that required the highest attention to avoid all the tricks on the way.

Lucio Alvarez and Ronnie Graue crossed one of the dunes´stages with a brio. The crew can be proud of their fourth place at the finish line of this third stage, behind Al Attiyah, Gordon and Peterhansel. At the overall classification, the duo from Mendoza takes the third position on their Toyota Overdrive. A great performance!

“Today it was great! Says Lucio as he arrives to the bivouac, welcomed by Jean-Marc Fortin, the manager of Overdrive.

The day started by the warning light of oil pressure that went on. We know that it could be a sign coming from the sensor, but it´s being tricking us since the beginning of the race so we were not very concerned about it. Then, the engine temperature went up… Without stopping, Ronnie, who is a great mechanic, found a fuse that was grilled in the radiator and changed it. Then, temperature went back to normal and we continue with no other problem.

It was a hard stage. The dunes were way too complicated to cross, very technical, the sand was hard and soft, and there were many broken dunes.

In the downhill part, a quad felt in the middle, and we took it smoothly because it was dangerous.

We wanted to complete a beautiful stage, but I don’t think this result would have been possible, and even less that we could be positioned in the third place overall. Now, we have to be realistic, today we succeeded, but we don´t know what will happen tomorrow… and the road will be long to get to Santiago!” 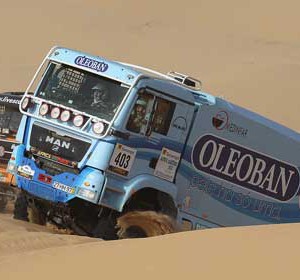 At the end of the ninth stretch of Sonangol Africa Eco Race 2013, Elisabete Jacinto finished third in her category, immediately...
Copyright 2011-2016 Rallyraid.net - RISE Network. All Right Reserved.
Back to top