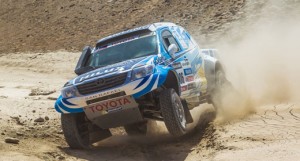 After their misfortunes in the special stage between Nazca and Arequipa, Lucio Alvarez and Ronnie Graue joined the last bivouac in Peru around midnight. Like in Cinderella, the fairy coach became a pumpkin… While the two friends decided to sleep at the bivouac, like at the time they did the Dakar in quads, the mechanics of Overdrive put the car back in shape, ready to face the special stage that would take the rally caravan to Chile.

The Argentineans started in the 21st position due to the “elite” class (and not by the ranking), and the crew finished the journey in the 13th position. The stage winner was Nani Roma.

“There was too much fesh-fesh, tells Lucio Alvarez, exhausted at the bivouac in Arica. It was a short, fast stage, very stony… I tried to do my best to keep the car in shape, the mechanics worked on it until early this morning and I didn´t want to make them work even more. There was a very amusing section, fast and technical. For the rest, nothing very interesting.

Ronnie and I are tired because we have not slept a lot. Tomorrow will be a new day, with a timed section of 455 km that will take us to Calama.” 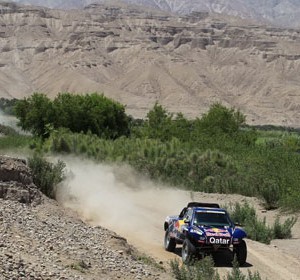 Stage Five of the 2013 Dakar saw Carlos Sainz recover from his recent setbacks and put on a driving masterclass for the Qatar...
Copyright 2011-2016 Rallyraid.net - RISE Network. All Right Reserved.
Back to top