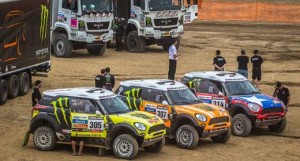 Just a few more hours to go until the Monster Energy X-raid Team will start into the 8000-kilomretre adventure across South America. In Peru’s capital Lima, the venue of the start into this year’s edition of the legendary cross-country event, the team around Team Manager Sven Quandt completed its final preparations. An extensive shakedown executed not far from Lima offered the X-raid drivers the chance of driving their ALL4 Racing for a final time, prior to the Dakar start.

Yesterday, on Friday, the entire team had to pass the administrative check and the scrutineering. Afterwards, the Monster Energy X-raid Team rally cars were checked by the scrutineers. While the service vehicles had passed their ASO scrutineering as early as prior to their shipment in Le Havre.

And while the majority of the mechanics already hits the road to Pisco early in the morning, with the service trucks and service vehicles, the drivers and their navigators look forward to crossing the start podium in Lima which will start around 9.45 local time.

“Finally the days of waiting are over,” beams Monster Energy X-raid Team Manager Sven Quandt. “Today, the rally will begin and we once again will go for it. On day one, the drivers will have to contest an individual 15-kilometre time trial but in the stages on the following days, the going definitely will get tough. Consequently, we have to be fully focused right from the start.”

“I just can’t wait for the start,” admits Stéphane Peterhansel, the 2012 Dakar winner. “I’m a racing driver and therefore, I’m getting more and more impatient, on the last days prior to the start into an event. The MINI ALL4 Racing is perfectly prepared and we are looking forward to battling it out with our competitors. But we are aware that we are about to face a difficult task: our rivals are extremely competitive and if you aren’t careful, you can lose your chance of winning this rally as early as in the first stages in Peru.” 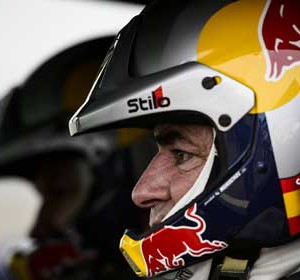 After the three days of technical and administrative scrutineering, the 449 drivers and their teams on the 2013 Dakar (183...
Copyright 2011-2016 Rallyraid.net - RISE Network. All Right Reserved.
Back to top