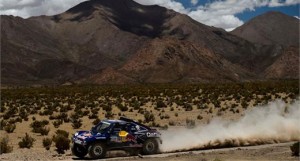 With each passing stage of the 2013 Dakar the expert driving of Nasser Al-Attiyah is fast turning the rally into a two-way contest between himself and Stephane Peterhansel. It was an early start this morning for Nasser and co-driver Lucas Cruz as they set off across the Andes to temporarily wave goodbye to Chile and say hello to Argentina. At the highest point of their mountain pass the pair reached an ear popping altitude of 4,975 metres.

After yesterday’s win on Stage Six it was Nasser’s job to open the road on day seven of the Dakar. Nasser’s Buggy led the day until the midway point before eventually conceding some time and finishing the stage in sixth position.

Stage Seven’s twisting path was always going to benefit four-wheel drive cars so for Nasser’s two-wheel drive Buggy to lose less than two-minutes between Calama and Salta is no disaster. Nasser holds onto second place after seven days of the Dakar with a gap of 3m14s from race leader Stephane Peterhansel.

In fact today’s result looks set to work out in favour of Nasser and Lucas. The Qatar Red Bull Rally Team duo will be the sixth car out on Stage Eight with a great chance to pass the cars in front and claw back valuable minutes.

Stage Eight of the 2013 Dakar brings with it a timed special of 471km before dropping the competitors off at the bivouac in Tucuman. Following this mammoth stage, Nasser and Lucas will have a well earned Rest Day while the mechanics prepare the Buggy for the second week of the Dakar.

Nasser Al-Attiyah: “This morning I was not feeling totally okay because I had something in my eye. My left eye was burning and that pain lasted all through today’s special stage. Despite this I was able to drive a controlled race and not create any problems with my car.

“To not lose any more than two-minutes on the stage to Stephane (Peterhansel) is a fine result. Today’s stage was definitely more suited to the four-wheel drive cars rather than our two-wheel drive Buggy. We will try tomorrow to have a big push so we can arrive at the Rest Day in a strong position.”

Lucas Cruz (co-driver of Nasser Al-Attiyah): “The first part of today’s stage was very fast along a dirty track and we had good speed in that section. Then the second part of the stage was along a narrow, twisty path and we were not so quick there. Tomorrow we start with a few cars in front of us and this should help us to stay in a good line.” 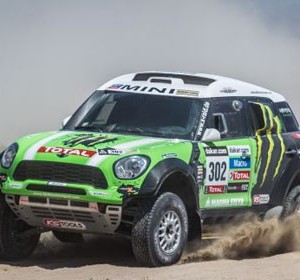 The 7th stage of the Dakar, in mourning following the death of rider Thomas Bourgin (see the special press release), was won by American...
Copyright 2011-2016 Rallyraid.net - RISE Network. All Right Reserved.
Back to top