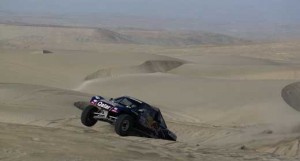 Nasser Al-Attiyah and navigator Lucas Cruz claimed a stage win for the second day in succession at the 2013 Dakar for the Qatar Red Bull Rally Team.

The Buggy of Nasser and Lucas was the first car out on today’s perilous desert stage before expert driving and faultless navigation secured their victory. The win on Stage Four of the 2013 Dakar is Nasser’s 16th Dakar Stage triumph of his career as he cements his place among the true legends of the desert classic. The stage victory sees Nasser and Lucas close the gap between themselves and the summit of the leaderboard to just 5m16s as they remain in second place on the overall rankings.

The news was not so good for Nasser’s team-mates Carlos Sainz and his co-driver Timo Gottschalk on the stage from Nazca to Arequipa. Carlos suffered from mechanical problems in the sands of Peru that effectively ended his chances of winning the race.

Carlos can now focus on adding to his own impressive tally of 26 Dakar Stage wins during the remainder of the rally. The Spaniard has also vowed to do everything in his power during the upcoming stages of the Dakar to help maintain Nasser’s attack at the front of the race.

Nasser Al-Attiyah: “It has already been a tough Dakar for us but I’m happy the team has been able to stay strong and get another victory today. What makes me so proud about today’s stage win is the fact that we achieved it despite opening the road.

“Its great to be winning stages because I’m not pushing the Buggy to 100% at the moment. I’m racing to about 60% of the car’s capabilities because my aim is still to finish the race and no more. Of course if I stay close to the top of the rankings and I have a chance to win I will have to reconsider my tactics.”

Lucas Cruz (co-driver of Nasser Al-Attiyah): “Today I’m very happy that we won the stage because it is never easy to open the road at a Dakar stage. It was a tricky stage with lots of dangerous areas. I was happy to do a good job and Nasser was driving very well today. Tomorrow we must open the road again and we will try to achieve the same result as today.” 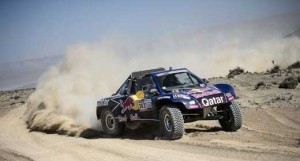 Carlos Sainz: “We had some real problems with our fuel intake on today’s stage and Timo must take the credit for getting us across the finish line. He did a fantastic job repairing the problems that we had so as a team we have to thank him for the job he did on the stage. Once it was clear that we had lost so much time the priority was just to bring the car to the end of the stage and fortunately we could do that.

“After today’s stage the chances of Timo and myself winning the rally are over. We knew that in a project like this when you bring a new car to the Dakar for the first time that this day could happen. My hope now is that Nasser can continue without problems. Whatever we learn from our car we can share that knowledge to help the team. From now on we will try to help Nasser and Lucas as much as possible. Timo and myself can also try to win a few more stages of this rally before we reach Santiago.”

Timo Gottschalk (co-driver of Carlos Sainz): “I think that if you want to be a good co-driver you need to have lots of skills. Not only being a good navigator but also having mechanical knowledge is essential. Ever since I was a young boy I have always been fixing cars so I was happy to get my hands dirty out on the stage today. It was not just my hands that I used to fixed the car, I also used one of my socks to wipe away the fuel when there was nothing else left to use.” 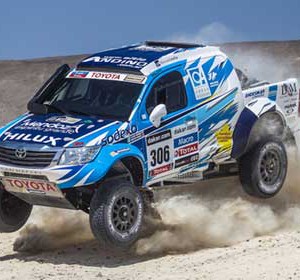 Nazca – Arequipa was announced as a very difficult stage with many dunes and complicated navigation. But it was neither...
Copyright 2011-2016 Rallyraid.net - RISE Network. All Right Reserved.
Back to top