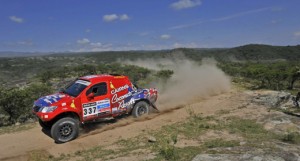 The Overdrive Racing quartet of Geoff Olholm, Adam Malayz, Lucio Alvarez and Nunzio Coffaro enoyed a successful 10th special stage of the 2013 Dakar Rally between Cordoba and La Rioja in Argentina on Tuesday.

Alvarez and Olholm set the sixth and 12th fastest times; Olholm climbed to 11th overall as a result and displaced Chile’s Boris Garafulic, while Alvarez moved in front of Frenchman Christian Laveille into 15th.

Toyota Imperial South Africa Team driver Giniel de Villiers and his German co-driver Dirk von Zitzewitz set the fourth quickest time on the day’s stage and remain in a comfortable second overall. But they dropped a further 3min 07sec behind leader Stéphane Peterhansel and now trail the Frenchman by 52min 38sec with four stages remaining before the finish in Santiago on Saturday.

“It was a relatively quiet day today by our standards but tomorrow we head to the dunes in Fiambalá,” said De Villiers. “We lost a little time in the dust today but we managed to make our hold on second place a little stronger.” 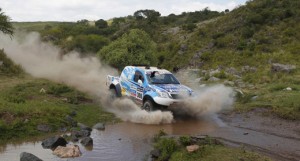 Only 102 cars began the 10th stage across Argentina from Cordoba to La Rioja over more traditional WRC terrain and through the Vila Carlos Paz region, where rocks, dust, deceptive corners and hilly ascents and descent were prevalent. A 38km link took crews to the start of the competitive section of 353km and a liaison of 242km guided the survivors into La Rioja. The bikes and the quads rode across a slightly different special stage but both specials featured tricky navigation and numerous parallel trails to catch out the unwary.

Former front-runner Nasser Saleh Al-Attiyah had retired with water pump failure on the previous stage but De Villiers lined up fifth on the road and 49min 31sec behind Stéphane Peterhansel.

Argentinean Orlando Terranova and Spain’s Joan Roma made the early running and led through much of the early part of the stage, as De Villiers and Peterhansel swapped second and a virtual third and fourth on the special. Alvarez was also running well in fifth.

Terranova, Roma and Peterhansel eventually claimed the top three positions on the day’s special, but De Villiers drove at a measured pace to finish fourth to retain a comfortable second overall.

The Overdrive Racing duo of Australian Geoff Olholm and British co-driver Jonathon Aston began the day in 12th overall in the Cairns Coconut Resort-supported Toyota Hilux and the 12th quickest time ensured that they move up to a fine 11th. Alvarez and co-driver Ronnie Graue completed the special in sixth position, sandwiched between Robbie Gordon and Matthias Kahle, and they moved up to 15th overall. 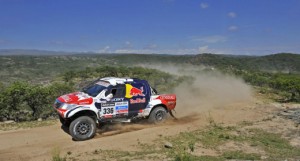 Former ski jump champion Adam Malysz and co-driver Rafal Marton were classified 14th at the start of the day, but lost time on the special and were classified in 20th at the finish. They remain 14th in the general classification.

Tomorrow (Wednesday), crews head towards the Argentina frontier with Chile and what promises to be a critical special stage to Fiambalá. The special, albeit only 219km in length, is one of the most feared in South American Dakar history and includes the notorious white dunes of Fiambalá that are nestled in the Andes foothills and have caused carnage on the event’s leader board in previous years.

In 2012, rain ensured that the sand remained firm and caused few problems, but the ASO have included a new series of sand dunes this time to further test the crews’ resolve as they head north. 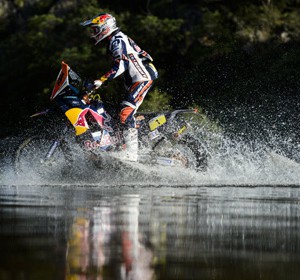