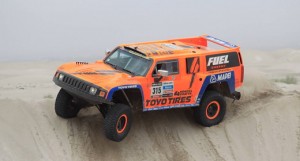 Although the 11th special was again affected by the weather, American Kurt Caselli (Red Bull – KTM) obtained a 2nd stage victory on the Dakar, whilst general standings leader Cyril Despres  (Red Bull KTM) further increased his lead. In the car race, the special was stopped after only 53 km, following flash flooding that prevented the competitors from crossing a river on the route of the stage. This was a Godsend for Robby Gordon who picks up his 1st win on the Dakar 2013 as a result, whilst in the truck race De Rooy should be granted the victory. The situation has not led to any changes in the general standings, with Peterhansel and Nikolaev still leading their respective categories. 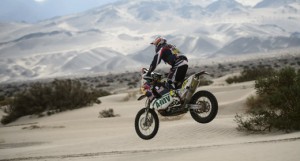 Caselli at the double, Despres at ease. On the 11th special stage, shortened by 30 km due to the delicate state of the start following bad weather during the last few days over the region of Fiambala, Kurt Caselli again proved that he has not just replaced Marc Coma by chance. Having started fifth, the American took advantage of the sand made more stable by the last few days’ rainfall, to show his power and skill on Baja types of terrains. The outcome was a 2nd stage victory on his first Dakar for the newcomer nicknamed “Special K”, 4’45 ahead of Paulo Gonçalves and 6’24 in front of Cyril Despres. Despite a small navigational error at the start of the stage, the title holder nevertheless made up for it by the end and strengthened his leading position in the general standings. He now leads team-mate Ruben Faria by 13’16” and “Chaleco” Lopez, who finished the stage in 5th place after losing his bearings somewhat toward the end of the stage, by 18’08”. Finally, following a serious fall 50 km from the finishing line, Spaniard Joan Barreda injured his shoulder and is not sure of being able to start tomorrow.

In the quad category, Australian Paul Smith also took advantage of the more sturdy sand than thought to pick up his 1st stage victory on the Dakar, 4’18 ahead of Gaston Gonzalez and 5’42 in front of Marcos Patronelli. This result has not changed much in the general standings, where the younger Patronelli brother is still way out in front, with a lead of 1:50’22” over Ignacio Casale and 2:46’59” over Rafal Sonik.

In the car category, the weather again threw a spanner in the works on the 11th stage. The simultaneous flash flooding in two rivers at the 69 km and 85 km points on the day’s route forced the race directors, for safety reasons, to halt the race at CP1, after 84 km. Robby Gordon (Hummer) was in front at this point, with a lead of 38” over Ronan Chabot and 1’47” over Lucio Alvarez, so logically he will be awarded the stage victory, making it his 8th on the Dakar. In 6th at CP1, 39” behind his main rival Giniel de Villiers, Stéphane Peterhansel still retains command of the general standings with a lead of 51’59” over the South African. 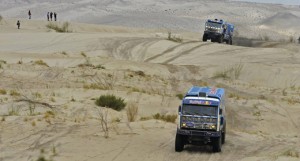 Finally, the problem was the same for the truck race, and so was the outcome. Gerard de Rooy achieved the best time at CP1, 56″ ahead of Alès Loprais. As a result, this will mean a 24th stage victory for the Dutchman on the Dakar and the 6th this year. In the general standings, Russian Eduard Nikolaev will still have a solid lead, but should now sit in front of his team-mate Ayrat Mardeev, who looks to have taken advantage of the problems encountered by Czech driver Martin Kolomy at the very beginning of the stage. 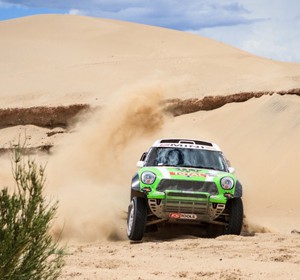 A slightly altered version of the song line “I’m singing in the rain” would be perfect to describe this year’s Dakar...
Copyright 2011-2016 Rallyraid.net - RISE Network. All Right Reserved.
Back to top