The morning at the press center begins with the tragic news: Thomas Bourget died in a collision with a police car at the time when 25-year-old French motorcycle racer was driving to the special stage start. This is the third victim of the current “Dakar”, the day before near the border of Peru with Chile, an accident with the participation of three cars happened – one escort car and two taxis, two persons died. 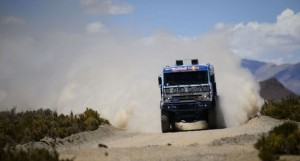 Today the rally continued on the south-east, and after crossing the Andes was in Argentina. The destination was the city of Salta. In 1544, after the victory over Incas the Spaniards found in the mountains of modern Bolivia powerful silver vein. The main part of the precious metal was sent to Lima, another part of this metal smuggled through Salta to Buenos Aires. Against this background, the city quickly flourished and became one of the most beautiful corners of the provincial South America. The Dakar competitors destined for the new bivouac of rally by smugglers roads. 218-kilometer special stage was laid by the organizers in the foothills of the Andes on the average height of about 3500 meters.

“The first part of the route passed on a plateau and was quite high-speed, – says Ilgizar Mardeev, – but toward the end, the stage turned into “tram” race. Narrow mountain roads, crevices and cliffs didn’t allow to overtake slower crews”.

For the same reason, Eduard Nikolaev today wasn’t as fast as at the previous stages. Eduard himself is a little disappointed, it is clear that the young pilot is determined. But we must accept that on the narrow mountain sections there is difficult to do something, when in front of you a dusty caravan of slower competitors. Take a risk and overtake in these conditions is very risky – you can easily cut the wheel, and then with hardly won seconds will turn into minutes spent to the wheel changing. Or worse, as for example Jo Adua which truck turned over.

Gerard De Rooy said about the stage: “These foolish buggies didn’t give to overtake themselves. I had to go after them for a long time. On the high-speed sections, they overtook me, but on the section with poor roads they are very slow. Today, I lost a lot of time. The stage was rocky, and I had to take a cautious mind. The first part of the track was very boring; on average our speed within the first hour was about 134 kilometers per hour. It is very boring. “

Another rival of Russians Ales Loprais probably goes for broke, he was fast, and today he is second (+00:01:09). Andrey Karginov pleased that he was quite comfortable riding behind De Rooy and conceded to him only 1 minute 38 seconds.
Another KAMAZ pilot was less lucky. Ayrat Mardeev had to stop when suddenly his gear box got out of order – he lost more than 10 minutes to repair it.

Closer to the midnight, the organizers decide to cancel the first part of tomorrow’s special stage. The reason – is heavy rain. The high-speed section for trucks entirely coincided with the canceled part of the track. This means that for trucks category there is no high-speed section on the route Salta-Tucuman. Trucks will proceed to Tucuman by Assistance route. 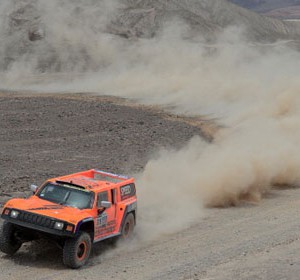