Following a much needed rest day for teams, today’s stage from Tucumán to Córdoba was one of the toughest and longest of this year’s Dakar Rally. Drivers faced a course similar to what would be seen during a WRC race, an advantage that the 4WD race cars had over the SPEED Energy / Toyo Tires / MAPEI HUMMER. 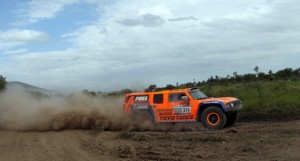 When the reviewed results came in for Stage 8, Gordon was scored third. Thus, he started third in today’s stage, which was helpful to keep pace with the leaders during the 593KM Special. Gordon lost a few minutes by KM100 and was down nearly 8 minutes to the leader near by the second half of the stage. Not letting the leaders stray too far, Gordon stayed in the top-5 for much of the Special bringing the HUMMER home with a solid fourth place finish, 8 minutes and 37 seconds behind.

“It was a good special for us. We most likely made a mistake not changing the tires after the first part of the stage, and most likely lost some time by not doing so. All in all, it was pretty good. Nani (Roma) was buzzing me to pass. He is most likely upset with me, but I was not going to pull over because I was buzzing Peterhansel. The SPEED Energy / Toyo Tires / MAPEI HUMMER is still here and rolling. I am sure we will jump up in the standings since we had a good run and beat a lot of cars today.”

A few hours into the bivouac and only seven cars have finished the stage. Overall standings will not be posted until more cars cross the finish line. With many teams having issues today, Team SPEED hopes to take a jump in the overall standings. Still many hours behind leader Peterhansel, everyone knows that anything can happen in the Dakar Rally, the toughest off-road race in the world.

Stage 10 starts with a short 37KM liaison to the start of a 353KM Special and finishing with a 242KM liaison headed towards the city of La Rioja. The competitors will face another 2 days of racing in the Argentina countryside before stepping back into the country of Chile. Gordon looks to take on even more WRC style tracks tomorrow. 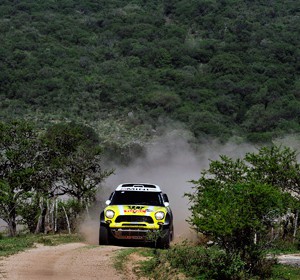 What a day for the Monster Energy X-raid Team: the ninth stage, from San Miguel de Tucuman to Cordoba, did not only bring...
Copyright 2011-2016 Rallyraid.net - RISE Network. All Right Reserved.
Back to top