On a 12th special stage marked by the joint strategy of general standings leader Cyril Despres and his provisional runner-up and team-mate, Ruben Faria, Dutchman Frans Verhoeven picked up his 4th stage victory on the Dakar and his first since 2011. In the general standings, Despres and Faria are solidly installed in the first two places ahead of “Chaleco” Lopez. The situation is almost identical in the car category, where Stéphane Peterhansel is focused on protecting his lead. Despite a small scare after grinding to a halt in the dunes, the Frenchman has a comfortable lead in the general on completion of the special won by Nani Roma. 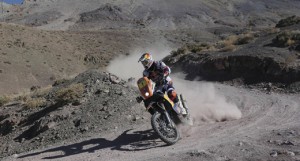 Despres and Faria control the general, Verhoeven takes advantage… Cyril Despres, third to start the day’s special, decided to protect his team-mate Ruben Faria against the attacks of Chaleco Lopez who is always a threat on home soil. As a result, the general standings leader preferred to hold back a little and leave opening the tracks to his rivals, less skilled in navigation. The outcome was a more moderate pace to the race. This strategy paid off perfectly, because at the finishing line, Ruben Faria, tenth to start today, having quickly caught up with the stage leaders, achieved the second best time of the day, 1’38 behind Frans Verhoeven. The Dutchman, 12th to start, took advantage of clear tracks to really hit the gas, picking up his first victory on the Dakar 2013. Behind him, in spite of a painful shoulder following yesterday’s fall, Spaniard Joan Barreda put in the day’s 3rd best time, 16” in front of Alain Duclos, an excellent 4th on his Sherco.

In the general standings, Despres’ and Faria’s strategy also functioned flawlessly because the title holder remains untroubled in the lead, 5’39 ahead of his Portuguese team-mate who enjoyed the additional bonus of adding a further 3 minutes to the gap that separates him from Chaleco Lopez, 7th quickest today, now 13’40 behind the rally leader.

In the quad category, the return to the dunes and off-track riding brought Sebastien Husseini back to his favourite terrain. As a result, the Dutchman, who lives in the United Arab Emirates, finally won his first stage victory on the Dakar, 1’08 ahead of Marcos Patronelli. However, the Argentinean still boasts a more than comfortable lead in the general standings, 1:52’35” ahead of Chilean Ignacio Casale. 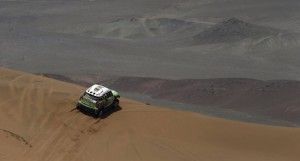 In the car category, despite a fright with a burst tyre at the very end of the special, Nani Roma took advantage of successive mistakes made by Robby Gordon, then by Stéphane Peterhansel, to grab his 3rd stage victory this year, 4’18” ahead of the American. Now officially focused on protecting his lead in the general standings, the overall leader and title holder drove without forcing the issue too much and although he did briefly get stuck in the dunes, “Peter” only lost 6’03” to Roma and more importantly merely 1’38” to his closest pursuer, Giniel de Villiers, 3rd today, 4’25” behind the Catalan. As a result, 2 days away from the finish in Santiago, Peterhansel still has a lead of 50’24 over the South African and 1:31’06” over Roma, the new 3rd placed driver at the expense of Novitskiy. 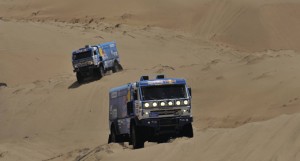 Finally, in the truck category, the race boiled down to a duel between the Kamaz Red Bull team! Currently 3rd in the general standings, over the last stages Andrey Karginov has his eye on taking second place from his team-mate Ayrat Mardeev. As a result, he is attacking whenever he can. The outcome was a 2nd stage victory in 2013 for Karginov, the 4th in his career, finishing 2’36” ahead of his team-mate and main rival Ayrat Mardeev. The latter of the two Russians, as consistent as ever, finished 13″ ahead of Gerard De Rooy, who stormed through the beginning of the special, but was soon slowed by a puncture. The day’s action has not changed the general standings however, where Nikolaev has an imperial lead, 31’20” ahead of Mardeev and 50’26 in front of Karginov. 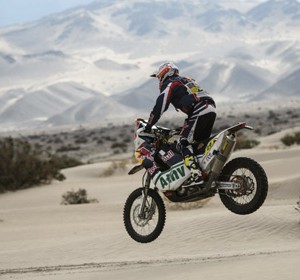