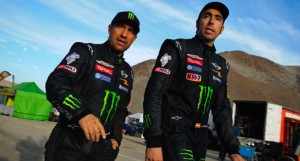 The Monster Energy X-raid Team drivers had to work their way up the mountains, in the seventh stage. On the way from Calama, Chile, to Salta, Argentina, the Dakar field crossed the Andes at an altitude of nearly 5,000 metres above sea level. And during the special stage, the drivers, navigators and their vehicles also had to cope with thin air, as the 218 special-stage kilometres had to be covered at altitudes between 3,400 and 4,000 metres. In the battle for the overall lead, between Stéphane Peterhansel (FRA) / Jean-Paul Cottret (FRA) in the green MINI ALL4 Racing and Nasser Al Attiyah in his buggy, the French pairing came out on top, today. In the end, they won the special stage with a 1:56-minute lead over their rival from Qatar.

These valuable minutes were gained by Peterhansel in the closing stages. “The first part was simply very fast,” the Frenchman explained. “You just had to go flat out. Later, however, the track got narrower and technically more demanding. And that’s my terrain.” In the overall rankings, he extended his lead over Al Attiyah to 3:14 minutes.

Meanwhile, Orlando Terranova (ARG) and Paulo Fiúza (POR) also confirmed their upward trend. They finished fourth, with their BMW X3 CC. “We had another good, trouble-free day,” said Fiúza. “Nonetheless, the altitude proved to be rather exhausting.” Like Peterhansel, Terranova also got really going in the closing stages. In the fast sections he held seventh position but then, in the technically demanding part of the special stage, he succeeded in working his way up.

The Russians Leonid Novitskiy and Konstantin Zhiltsov in the orange MINI ALL4 Racing, however, weren’t that happy. “This just wasn’t our terrain,” admitted co-driver Co-Pilot Zhiltsov. “We didn’t make any mistakes and nonetheless, we failed to gain ground. Leonid and I are just better on sand and dunes.” By finishing eighth, they defended their fourth position in the overall standings.

Nani Roma (ESP) and Michel Périn (FRA) gave their very best to work their way back up. With their yellow MINI ALL4 Racing, they started into the special stage from 25th position and had to pass not only competitors in the car ranking but also several race trucks. “For us, this was the day of the dust,” said Roma. “Throughout the special stage, we were driving in the dust cloud of one of our opponents. I didn’t want to take any incalculable risks and so, I overtook only when I was sure that nothing could go wrong.” Over the course of the special stage, he worked his way up to 12th position.

In the final stage before the day of rest, the competitors once again will have to cover a big distance: Altogether, they stage comprises 851 kilometres: the day begins with a 152-kilometre liaison section, followed by a 471-kilometre special stage. And afterwards, the teams will have to drive another 242 kilometres to the bivouac. The special stage once again will be split by a neutralisation period. The first part will take the field across a typically Argentinean landscape with canyons and cactuses. Following the neutralisation, it’s back to sandy terrain. 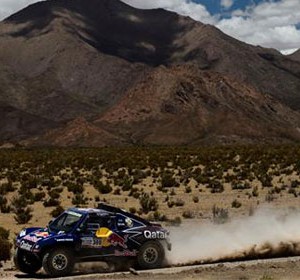 With each passing stage of the 2013 Dakar the expert driving of Nasser Al-Attiyah is fast turning the rally into a two-way...
Copyright 2011-2016 Rallyraid.net - RISE Network. All Right Reserved.
Back to top