The eve of the 2013 Dakar Rally was a full day of work for the drivers and crew of the Qatar Red Bull Rally Team. 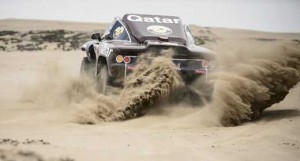 When the team arrived this morning at the Dakar Village the first order of business was to get both Buggies through the rigorous scrutineering checks. Dakar organisers put every vehicle under the microscope to ensure that the race’s strict regulations are met. It’s a nervous time for competitors at the Dakar as they wait for the green light before taking their place on the start line for the first stage.

No nasty surprises were revealed as the Buggies of Nasser Al-Attiyah and Carlos Sainz underwent scruniteering and the race cars were rubber stamped to take part in the 2013 Dakar Rally. With the final checks of their vehicles completed it was time for the Qatar Red Bull Rally Team to take a stroll through the Dakar Village. The team’s destination was the Red Bull Energy Station where they were greeted by the world’s press.

Nasser and Carlos as well as their co-drivers Lucas Cruz and Timo Gottschalk were coy about their chances of winning the Dakar as they all restated the team’s ambition to simply get both cars across the finish line in Santiago. It was the Peruvian journalists who eventually managed to get a firm answer out of Nasser when they asked him what was his favourite local dish. Nasser’s answer of Ceviche got a big round of applause from the Peruvian crowd who have once again take the Qatari to their hearts.

An action packed day in the Dakar Village was rounded off by a spectacular flying show from Red Bull Air Race champion Kirby Chambliss. Nasser and Carlos had their eyes transfixed on the skies as Kirby performed a series of daring manoeuvres above Lima’s Pacific Ocean coastline.

Carlos Sainz: “It was great to feel the enthusiasm from the Peruvian crowd today as we went through scrutineering in the Dakar Village. It’s great to go into the race knowing that so many people are hoping you can achieve a good result. Timo and myself will be feeding off that energy throughout the race.

“Tonight will have the final briefing before the race and we will get the roadbook for tomorrow’s stage. Although it’s going to be a short first stage it will be another chance for us to learn more about this new Buggy we have come here to race.”

Timo Gottschalk (co-driver of Carlos Sainz): “The final day before the race starts is always demanding because there is no quick way to get through all of the scrutineering checks that must be performed. Every check you pass during scrutineering brings you closer to the start of rally so that’s what I have been focusing on today.”

Nasser Al-Attiyah: “Today was a tough day for sure but at least we didn’t have any major problems with our Buggy, now I will try to relax before the start of the race. It was also a good opportunity to spend some time in the Dakar Village today and meet the fans that have been waiting to see our new Buggy in action.

“It was like a family reunion at the Red Bull Energy Station because not only were Lucas and myself joined by Carlos and Timo but also Giniel (De Villiers) and Dirk (Von Zitzewitz) were there as well. We were all champions during our time with Volkswagen and sharing those great moments together is something I don’t think any of us will ever forget.”

Lucas Cruz (co-driver of Nasser Al-Attiyah): “There were a lot of boxes to tick today during scrutineering, we needed to have all of our personal paperwork in order as well as the car. I have been through this process many times now and the trick is to stay calm and remember your passport! I was relaxed about our Buggy being inspected because we performed all the necessary checks ourselves during our testing session in California. 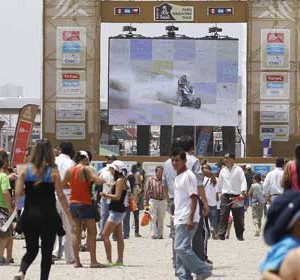 In Lima, the spectators have been hurrying to the Dakar Village and the scrutineering site, where the favourites in the truck...
Copyright 2011-2016 Rallyraid.net - RISE Network. All Right Reserved.
Back to top