The Dakar caravan was very grateful for the half way rest halt… especially as Stage 9 was an incredible 593km long! 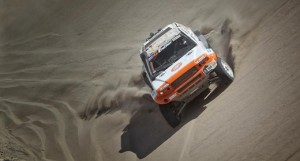 The track wasn’t the most technical of the event, mostly WRC style tracks through the mountains and savannas… but tell that to Nasser Al-Attiyah and Gerard De Rooy whose challenges for victory ended here. De Rooy’s Iveco had a host of problems, first the turbo, then the steering wheel and finally a puncture while no one really knows what happened to Al-Attiyah. Some say he had mechanical issues while others say that he got stuck… What is certain is that his name is not anywhere near the top of the list any more.

But for such a big stage there were surprisingly few changes of position… and there was a reason for that as Boris Gadasin explains. “Unfortunately there was a lot of dust. The organizers let only the first ten cars to start with 3 minute gaps, all others start after just a minute. So it immediately became like a toy train-set. It’s not the best types of tracks for the 2wd buggies so they went slow… so cars behind them were slowed down. It was a pity because the twisty mountain tracks are what I like…” 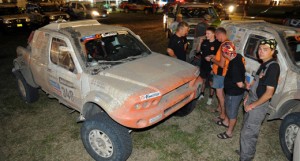 Vladimir Vasiliev agreed. “I liked this special. The track was twisted, 3D, beautiful! But very soon we ran into the dust after Boris Gadasin! At first we didn’t want to take a risk of overtaking him but then we tried… and got a puncture. While we were changing the wheel, three cars passed us and after that we managed to overtake only one buggy. The dust was so thick we could not get closer to a fore-coming car for a distance of attack. About 350 kilometers we followed the dust of #317. We were sending him Sentinel signals but he did not let us pass. Once we almost bumped into him and wanted to take the Sentinel and knock on his window with it! No possibilities of overtaking at all!”

But with Vasiliev taking 11th today, he moves into the Top 20, from 21st to 18th while Gadasin takes over his team-mate’s old position in 21st.

Stage 10’s 353km will offer much the same with tracks through the open plataeu used on the Agentinian round of the WRC. 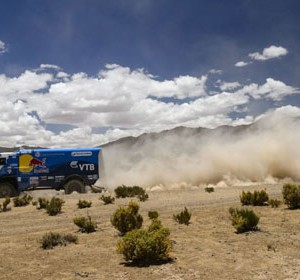 After a rest day in Tucuman Dakar competitors continued to move to the south-east towards Cordoba. From the journalistic...
Copyright 2011-2016 Rallyraid.net - RISE Network. All Right Reserved.
Back to top