With David Casteu winning the day’s stage and Olivier Pain still on top of the general standings, the excellent health of the Yamaha YZF was confirmed today. However, Joan Barreda lost out big time, halted by fuel problems. In the car race, Nani Roma and Stépahane Peterhansel shrugged off the buggies that have been battling with them since the start of the Dakar. Guerlain Chicherit, with an injured wrist, is not sure of starting out from Arica tomorrow morning. 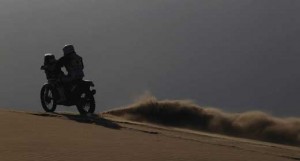 The first impressions have proved to be correct. For the last few weeks, the riders of the various versions of the Yamaha YZF have not stopped praising the progress made during the year that has passed. In the battle with KTM, Husqvarna and Honda, the blue bikes have quickly made their mark. To illustrate, Olivier Pain took control of the general standings yesterday, in front of his team-mate David Casteu. Might the two Frenchmen have taken advantage of the racing context to stage a hold-up on the race order? No way! This morning, the duo dealt with the situation with aplomb, opening the road almost right throughout a special stage that was quicker than the previous ones. The power of the Yamaha spoke volumes, to the benefit of David Casteu, who added a third stage victory on the Dakar to the ones he won in Nouakchott in 2006 and Cordoba in 2010.

Olivier Pain and David Casteu managed to hold off Cyril Despres, who could have taken advantage of his starting position to try and regain control of the rally today, but who did not achieve such a feat. What’s more, the struggle for the title will probably no longer involve Joan Barreda, halted by fuel pump problems for a significant part of the day at the 98-km point. For the moment, a 100% French trio are dominating the rally, with 6 minutes separating the three riders. The match between the teams is up and running too, because behind the two Yamahas, the KTMs ridden by Despres and his water carrier Ruben Faria are awaiting an opportunity to spring an ambush, followed by the two Husqvaranas ridden by Jordi Viladoms and Alessandro Botturi, who will be taking up the baton from their unfortunate team leader, Barreda Bort.

In the quad race, Yamaha has dominated for the last several years. It was therefore natural that this machine was chosen by Marcos Patronelli, who has put in a flawless performance since the beginning of the second stage. The Argentinean, who won the rally in 2010, won a 4th consecutive special stage and opened up an even bigger gap on his rivals. Sebastian Husseini, who had managed to stay in contact until today, ground to a halt with mechanical problems and will lose several hours on Patronelli by the time he arrives in Arica. Now the closest pursuer to the race leader is Chilean Ignacio Casale, who is nevertheless 1 hour and 18 minutes behind. 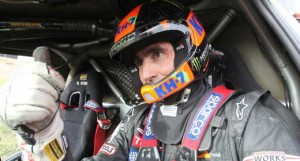 In the car category, the trend observed over the last few days also changed slightly, with a small decline in fortune for the buggies which until today had excelled and fought bumper to bumper with Stéphane Peterhansel. This time, on the winding tracks of the relatively short special stage they had to tackle (172-km long), it was the Frenchman’s team-mate Nani Roma who put in the best time and won his 6th Dakar special stage in the car category. In general, the 4x4s had the upper hand, because behind Nani Roma, the Mini number 302 driven by Peterhansel only lost 1’23” to the stage winner. Robby Gordon managed to put his Hummer on the day’s podium, Giniel De Villiers and his Toyota Hilux came in to the finishing line 1’51” behind Roma, whilst Leonid Novitskiy put a third Mini in the top 5! Nasser Al attiyah, who opened the road, lost 6 minutes in relation to Roma but kept second place in the general standings, 9’54” behind Peterhansel. Finally, Guerlain Chicherit, who came so close to winning the special stage yesterday, reached the finishing line exhausted and probably with an injured wrist: following damage to his power-steering, it was extremely difficult to steer the buggy. Just like two years ago, the Dakar could finish in Arica for Chicherit!

In the truck category, Ales Loprais’ stay at the top of the general standings did not last long. Twenty kilometres from the finish, the Czech driver got stuck in the sand, losing the race leader’s position to Gerard De Rooy in Arica. The pressure from his rivals is very real, however, since Edouard Nikolaev, 2nd on the stage behind Hans Stacey, only trails the title holder by 5’33”. 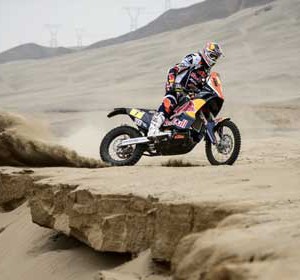