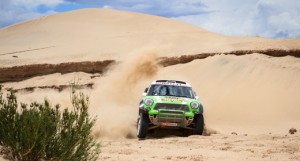 A slightly altered version of the song line “I’m singing in the rain” would be perfect to describe this year’s Dakar Rally: “I’m stopping in the rain.” During the course of the 11th stage, torrential rain in the Andes once again caused a tidal wave in a previously dried up riverbed. Just minutes after the leading cars had crossed the riverbed, the water masses made crossing the riverbed for the rest of the field impossible. Consequently, the ASO opted for stopping the special stage at CP1 and told the competitors to drive to the finish. A scenario that brought back the memories of the eighth stage from Calama to San Miguel de Tucuman – that also had to be aborted due to a tidal wave.

As today’s special stage would have been a loop around Fiambala, the competitors weren’t far away from the bivouac when the race action was stopped. Short after the decision, the MINIs ALL4 Racing and the BMW X3 CC returned to the Monster Energy X-raid Team. “To be honest, every kilometre less to cover is a kilometre less to make a mistake,” admits overall leader Stéphane Peterhansel. Altogether, the Monster Energy X-raid Team drivers were determined to not fully attack today to avoid making mistakes. 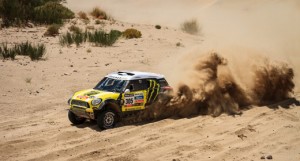 Tomorrow, the Dakar field is going to cross the Andes for the second time. On the way from Fiambala to Copiapo, the competitors will drive on the lovely Pasa San Francisco. This means that the Dakar will leave Argentina to enter Chile for the second time, this year. During the course of the 392-kilometre liaison section, the teams also will have to deal with the border formalities. Afterwards, the drivers will have to contest a 319-kilometre special stage that will end just four kilometres from the bivouac. During the course of the special stage in the Atacama Desert, the competitors will have to cope with challenging dunes but also will have to complete rocky sections. 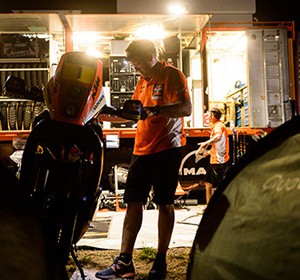