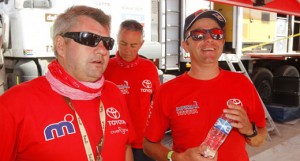 South Africa’s Giniel de Villiers and German co-driver Dirk von Zitzewitz strengthened their grip on third overall in the 2013 Dakar Rally after finishing fourth in their Toyota Imperial South Africa Hilux on the short fifth stage that finished near the Peruvian border with Chile on Wednesday.

“It was quite a fast stage and a little twisty at the beginning,” said De Villiers. “We had a small problem with the brakes, the rear brakes, and we lost a bit of rear brake. Other than that it was a nice stage and beautiful on the beach.”

Argentinean Lucio Alvarez and co-driver Ronnie Graue had lost their place in the top three after a suspension arm failure on the previous stage and the Overdrive Toyota crew were determined to recover some of the three lost hours that had seen them tumble to 27th overall. They were reseeded for the fifth stage in 21st on the road, running just in front of Orlando Terranova and Carlos Sainz, and finished the stage in 13th position to climb to 25th position. 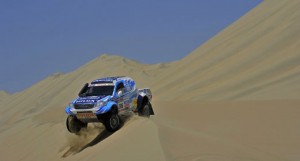 One hundred and twenty-nine cars were eligible to start the 172km special stage in southern Peru, before the Dakar caravan crossed the border into Chile and moved on to the overnight halt at Arica via a short 53km liaison.

The special crossed different terrain to the dunescapes that had dominated the other sections in Peru and rocky tracks, wadis and riverbeds were prevalent to offer a very different challenge. Motorcycles and quads tackled a different special to the cars, which left before them to reach the start of their special near the border via a liaison of 284km.

Al-Attiyah was first on the road and trailed Peterhansel by 5min 16sec in the overall standings, with Toyota’s De Villiers in third place. The car special finished on the beach between Playa el Toro and Chusqui and Roma set the fastest time after Carlos Sainz and Roma had set the pace in the early kilometres. 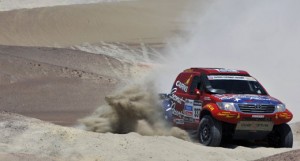 Al-Attiyah dropped 6min 01sec to Peterhansel after a navigational issue and now trails the Frenchman by 9min 54sec in the overall rankings, as De Villiers confirmed the fourth fastest time in his Toyota behind Roma, Peterhansel and a resurgent Robbie Gordon.

Australian Geoff Olholm and British co-driver Jonathon Aston were knocking on the door of the top 10 at the start of the final stage in Peru in their Cairns Coconut Resort-supported Toyota Hilux. But they dropped a little time to the Brazilian driver Guillerme Spinelli and slipped a position to 13th, despite a clean run through the special.

The Polish duo of former ski jump champion Adam Malysz and Rafal Marton had survived the rigours of the Peruvian dunes with aplomb and headed into stage five classified 19th in the overall standings. The 23rd quickest time on stage five ensured that they retained their position.

Venezuelans Nunzio Coffaro and Daniel Meneses started the fifth stage from the dizzy heights of seventh on the road in their Team Azimut Toyota, as they bid to continue their march into the top 20. They completed the stage without major problems in 19th position and maintained 20th overall. 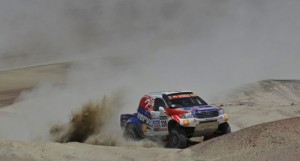 Szymon Ruta and co-driver Laurent Lichtleuchter started the fifth stage, near the Chilean birder, from 70th position in the overall standings in their Orlen-backed Hilux. They were seeded 55th on the road and reached the finish with the provisional 26th quickest time to continue their climb back through the middle of the field.

“Our speed was 150km/h on a long and especially wide plain,” said Chevallier in hindsight. “At the end there was a small dip and behind it a large stone. We were launched and bounced on the ground.” The car was wrecked in the accident.

Tomorrow (Thursday), crews tackle one of the longest special stages of the entire event, a 438km timed test across the Atacama desert from Arica to Calama in northern Chile.

The demanding special follows a long southerly liaison of around 291km to the start at Iquique. The special then meanders through the Pampa del Tararugal National Reserve region and then begins a steady, energy and horse power-sapping climb into Calama. 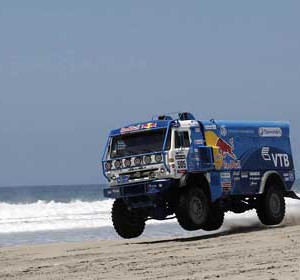 Bivouac in Arequipa can be called successful for "KAMAZ-Master Red Bull" team. Last year on the way to this city, which is considered...
Copyright 2011-2016 Rallyraid.net - RISE Network. All Right Reserved.
Back to top