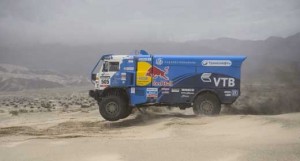 At 16.30 local time Dakar sports commissioners published a decision concerning the results of the 11th stage of Dakar. There was also the information that: “Due to the force-majeure circumstances 11th stage was interrupted at 13:50. According to Art. 38P2 of Dakar-2013 Sports regulations it is necessary to apply to all vehicles which did not cross the CP2 line till the time of stage cancellation as a time of stage passing – 1 hour 13 minutes 25 seconds.”

A force majeure circumstance in this case is an overflow of the Rio Grande river, which rally competitors had to cross today.

Thus the organizers nevertheless scored the time of competitors which could reach CP1, those who was not able to reach CP1 up to the race stopping time, including those who was not able to start, the time of the worst crew which reached the checkpoint was given. It is an interlocutory decision. We can say that Martin Kolomy was lucky today; he managed to start but did not reach CP1, because he had a problem on the route, but anyway as a result according to the decision of judges the Czech pilot has a time of stage passing for 1 hour 13 minutes 25 seconds.

Top-6 of general classification following the results of the 11th stage: 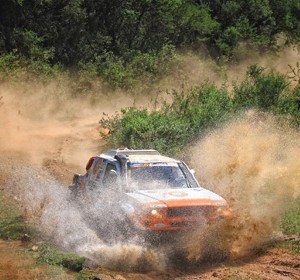 G-Force’s biggest successes have come in the shorter Baja style events rather than the long desert marathons. Boris Gadasin...
Copyright 2011-2016 Rallyraid.net - RISE Network. All Right Reserved.
Back to top