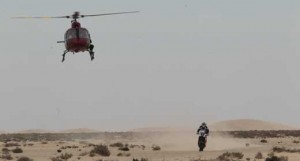 After a well deserved rest day by the Atlantic in Dakhla, the participants of the Sonangol Africa Eco Race hit the road to Mauritania on Friday 4th January 2013. A successful crossing for the Frenchman Jean Louis SCHLESSER in the car class and the Dutchman Guillaume MARTENS in the bike class who imposed on the short 160 km Special.

It was 5h30 in the morning when the first bike set out on the liaison towards the border between Morocco and Mauritania. After the necessary customs formalities that went smoothly with only one hour of delay, the participants were able to start the 6th stage for the bikes and the 5th for the cars. After the scorching Moroccan sunshine, the Mauritanian sun seemed to pale in comparison, covered by a light wind covering the landscape that fortunately didn’t perturb the race.

In the bike category Guillaume MARTENS once again let the power of his KTM 690 do the talking and came back against his opponents. He left in 9th position having gone wrong the day before yesterday and clocked the best time of the day

Thanks to this performance, the Dutchman got back 5’32 on Norbert DUBOIS who brought in his KTM in second position and 9’46 on Martin FONTYN who lost the lead to MARTENS. The Belgian is at present 2nd overall, 32 minutes in front of DUBOIS. He said on his arrival:  “The special was very fast today and even though I’m in the top category, my KTM 525 isn’t as quick as the 690s. I’ve given away some time but the most important thing is to get to the finish. When I was flat out on the bike, I knew that even a small badly negotiated bump would be distasterous. I’m relieved to get through this stage and I can’t wait to get into the dunes because I’ll be more comfortable with my small bike than the big KTMs will be.”

In the 450 category, it was again Frenchman Franck ARNOULT who took the scratch despite a minor fall on his HONDA, in front of the YAMAHA of Austrian Helly FRAUWALLNER and the KTM of Italian Alfredo PROCACCINI. Overall, lying in 4th position 16’37 from the leader, Patrick ARNOULT is well placed at the top of the “small” category in front of his compatriots Joseph PALACIOS and Christophe CONREAU.
A word to close the two wheel catagories with the Classic class where Bertrand BESSE is riding a HONDA XLM 600. For the moment, everything is going well for the Frenchman who continues his journey without fault on the Sonangol Africa Eco Race.

In the car category, the days seem to resemble one another as Jean Louis SCHLESSER won his 4th victory. This time, he particularly enjoyed his success:  “It’s very rare that I refuse to share my victory with my co-pilot but today, the reason that we clocked the best time was because at one point there were two options. Cyril wanted me to go right whilst I was certain that it was necessary to go left. I followed my instincts. It was the right choice and we were able to get ahead of Jérôme PELICHET. I’ll explain to Cyril ESQUIROL, who navigates very well for only his second race as co-pilot, why I didn’t follow his instructions, but I’ll only be telling him!”

Jérôme PELICHET had a bad day, only managing the 6th fastest time and lost 5’46 on Jean Louis SCHLESSER. A bad idea going into a difficult stage in terms of both driving and navigation. On the other hand, Joost VAN COWENBERG was happy at the finish, seeing as since the start of the Sonangol Africa Eco Race, it’s the first time that the TOYOTA Pick Up V8 of the Belgian driver hasn’t suffered a puncture. He was equally very satisfied with the work of his co-pilot Jacques CASTELEIN who has thirty years of experience in All Terrain Rallies. The Belgian crew finished 1’04 from the leader and 1’44 in front of Portuguese Paulo FERREIRA and Jorge MONTEIRO who are looking good going into the second week of the rally. A special mention goes to Abdelhamid ABOUYOUSSEF who took 5th place on this Special only 4’13 behind, as well as to Patrick MARTIN and John METZ also driving a VOLKSWAGEN Tarek who clocked the 9th fastest time of the day.

The story continued in ‘The adventures of Louis BURTON on the Africa Race’… The driver and his copilot Arnaud DUCHESNE got the 11th fastest time of the day with their COTEL buggy; an amazing progression that the two adventurers will have to confirm in the days to come. Finally, in the T2 class, the victory today went to Russian Kanat SHAGIROV in his TOYOTA, who is also the leader of this “small” category.

In the truck category, on this rather easy journey for them, the top speed of the KAMAZ made the difference. Anton SHIBALOV got the 4th fastest time of the day only 2’54 from SCHLESSER, gaining over 7 minutes on Elisabete JACINTO, still in 2nd place driving her MAN. The 3rd place of the day went to Belgian Noël ESSERS, also driving a MAN.

On Saturday 5th January, the Chami/Akjoujt Special will be 436 km long and will require a lot of driving and navigational skills. It’s highly likely that gaps will start to form on the 7th stage… 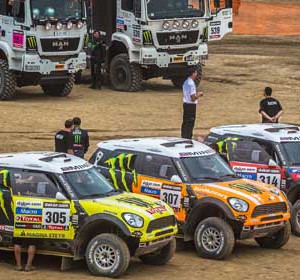 Just a few more hours to go until the Monster Energy X-raid Team will start into the 8000-kilomretre adventure across South...
Copyright 2011-2016 Rallyraid.net - RISE Network. All Right Reserved.
Back to top