Northern Forest – Evgeny Firsov: We fought for a podium! 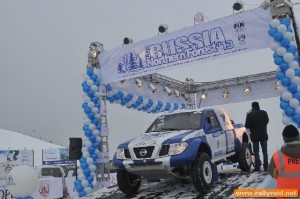 Russian “PEC” team perfectly started in international Baja “Northern Forest 2013”, at once climbing up to the group of leaders and having forced competitors to speak about itself.

On the Friday’s Prologue the “duo” Evgeny Firsov and Vadim Filatov on Nissan Datsun (ex-Overdrive car) finished with the second best time, having conceded only to leader Vladimir Vasilyev on G-Force Proto and having shown identical time with Finnish rally driver Harri Rovanpera acting on Mitsubishi Pajero.

Prologue was totally “off-road” – rigid, technical, with hummocks, holes and hills. The narrow road and track demanded jeweler accuracy in passing of numerous bends that certainly, not all worked well. During the first five kilometers of the Prologue about  ten sports cars got stuck in a snowbank, including such skilled racers, as Ruslan Misikov, Ilya Kuznetsov, Andrey Rudskoy and others. In addition, cars were turning around, sometimes on 180 degrees, there were crashes with trees, etc. On each mistake pilots have lost precious minutes of time! 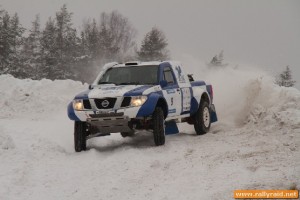 On Saturday, in the main racing day, participants should pass 300 km of the distance divided into three identical circles.
On the first circle Finns rushed to attack.  Juni Ampuja showed the best time and left in leaders of race, Vladimir Vasilyev became the second, and Evgeny Firsov finished third though it was very difficult.  According to the pilot of the PEK team, the beginning was given difficult, went, probing the route, were rolled and tried not to make mistakes.  On a short distance Victor Volikov’s crew approached white blue Nissan at number “9” with his G-Force Proto. 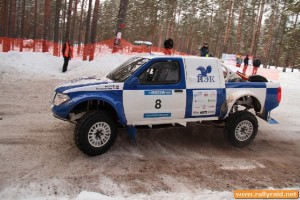 Both cars of “PEC” team run perfectly and if there were technical questions, in hands of professional mechanics of team, everything was solved on “one – two”!

“Cars are magic, perfectly hold the road”, – pilot Dmitry Iyevlev made comments on race.  –  And for us not everything turns out in piloting because of rear training and small experience.  On the second circle we hooked on a tree”.
Before start of a final leg of Evgeny Firsov / Vadim Filatov took the 4th position in 37 seconds behind Victor Volikov’s crew, and Dmitry Iyevlev / Alexey Shaposhnikov were the 9th.

Final 100 kilometers turned out the most intense and disturbing. Evgeny Firsov carried out good attack and won back at Volikov nearly a minute, having returned itself the third position, however for 30 km to finishing line, Nissan took off from the route, touched a tree and turned over, having blocked the race track. The car was quickly put on its wheels, the crew rushed off to the finish, but the lost minutes allowed to show only 6th overall result. The second crew of the team Dmitry Iyevlev/Alexey Shaposhnikov finished race with the 8th  result.

Evgeny Firsov: “Race was pleasant in spite of the fact that we didn’t hold a podium. The organization, the route, place and the general atmosphere of competition – everything was at the highest level. Race passed very tensely, we struggled for the third place with strong rivals therefore it is a pity that our efforts weren’t rewarded. The third leg became the most pleasant on piloting, we caught a good rythm, but it appeared that it was too much pushing, went too far in speed and as a result made a mistake costing to us of three positions in total classification. So I can’t tell that I am happy with result, though before race I would count it good”.

Dmitry Iyevlev:  “Excellent impressions of race, everything was great.  We are happy on a half with result, at least – to reach finish line, we executed.  But with piloting there was a problem because of shortage of practice and a long break in races.  On the first leg one T2 car overtook us!  It surprised us and helped at the same time!  Were adjusted and the following two legs passed much better”.

Summing up race, It should be noted that both crews of the “PEC” team receive the first points in the Russian Cross-Country Championship and start preparation for the following race – a rally raid “The Gold of Kagan” which will take place in Astrakhan from April 18 to April 21, 2013. 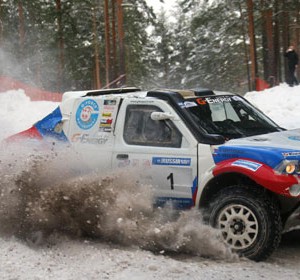 For the last couple of days thunderous Russian skies have been on the news but this morning it was thunder in the frozen...
Copyright 2011-2016 Rallyraid.net - RISE Network. All Right Reserved.
Back to top