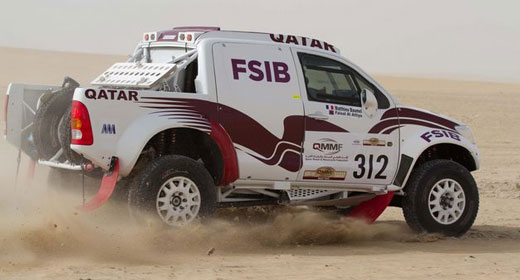 This year’s Sealine Cross-Country Rally, organised by the Qatar Motor and Motorcycle Federation (QMMF), will be fought out over four desert selective sections and will feature a longer route but a shorter timetable. The event is the third round of the 2013 FIA World Cup for Cross-Country Rallies and round two of the FIM Cross-Country Rallies World Championship and takes place on April 22nd-26th.

Qatar’s premier off-road event entered the FIA and FIM World Championships for the first time in April last year and was an unmitigated success with local hero Nasser Saleh Al-Attiyah winning the car category with an Overdrive Toyota Hilux, Spaniard Marc Coma achieving success with his KTM 450 in the motorcycle category and Poland’s Rafal Sonik winning the quad class on a Honda TRX.

Run under the guidance of Nasser Khalifa Al-Attiyah, president of the QMMF, this year’s event will run over just four desert special stages. Britain’s Fred Gallagher will act as event director and Portugal’s Pedro Almeida has been appointed as clerk of the course for the second year. Jaime Santos and Marwan Musabah have compiled the road books.

“This year there will be no super special stage,” confirmed Almeida. “Because of that the rally will be one day shorter than 2012 and will finish on a Friday. We will have four competitive days, four legs and four selective sections. The total length will be over 1,500km.” Almeida added that each of the first three legs will run over more than 400km and the last will be approximately 300km, with the bikes running a slightly shorter route of 250km on the final day.  “We are not planning to use any repeated stages,” confirmed the Portuguese. “Plenty of new tracks will be used. If we compare to 2012, there will be more off-road sections and more tricky navigation.”

QMMF president Nasser Khalifa Al-Attiyah also confirmed that the bivouac will be located close to last year’s site at Sealine and that the rally control centre, rally headquarters and all the media facilities will be situated at the bivouac and not at the nearby Sealine Beach Resort.

Administration checks, scrutineering, the initial briefing and the pre-event press conference will take place at the Losail International Circuit, north of Doha, on Sunday, April 21st and Monday, April 22nd.

The ceremonial start will then get proceedings underway on Doha Corniche from 18.30hrs on Monday, April 22nd and the first of four desert legs begins on Tuesday, April 23rd. Action draws to a close on Friday, April 26th.

Entries open for all categories on Thursday, February 21st.

Supplementary regulations are now available for download from www.qmmf.com.

Entries close at the reduced rate on Thursday, March 14th, with the final entry cut-off set for Thursday, April 4th.

Full details on costs and concessions are available at http://www.qmmf.com. 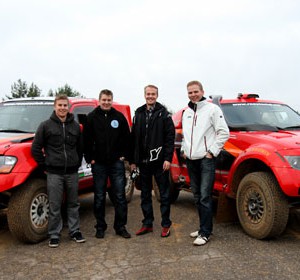