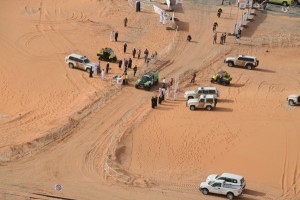 Saudi Arabia’s Yazeed Al-Rajhi overcame his engine scare at the end of the second leg to again dominate proceedings after the third and longest of the four selective sections of the Ha’il International Rally on Wednesday.

Al-Rajhi and French co-driver Alex Winocq were never troubled in their powerful Hummer and they led the 304km stage from start to finish to set the target time of 2hrs 58min 03sec. Czech driver Miroslav Zapletal and Polish co-driver Maciej Marton were no match for the flying Saudi and they reached the finish in second position – 34min 26sec behind the leading Hummer – and will now start the final stage on Thursday trailing by a mammoth 1hr 25min 54sec.

“We have been really pushing again today,” said Al-Rajhi. “In one wadi I very nearly rolled the car. I was extremely fortunate to get away with it.”

Inaugural event winner Rajih Al-Shammeri was on a charge for the second day after his first day delays and the Nissan driver clocked the third quickest time, just under a minute behind Zapletal, and he moved up from an overnight sixth overall to fifth position at the finish of the stage near the Jabal Aja hills. Ahmed Al-Shaqawi slipped behind Khalaf-Saleh Al-Joaan and into fourth. 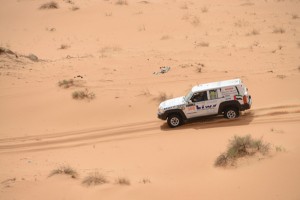 There were delays for Yaser Al-Saidan on the stage. The Saudi driver had started the day in the lower reaches of the top 10 and lost his places at the head of the leader board with technical problems. The UAE’s Yayha Al-Helai began the day from 16th in the overall standings and was running as high as fourth through the second passage control before he also stopped again. His retirement was blamed on a broken right suspension bracket after the Emirati had damaged the left one on Tuesday.

Saudi’s Yousef Al-Daif set the fastest time amongst the bikes and the quads across the third selection section, but the UAE’s Khalid Al-Falasi and Atif Al-Zarouni retained their advantages in the respective categories. Al-Falasi will take a lead in the motorcycle class of just under four minutes into the final stage on Thursday and Al-Zarouni managed to extend his lead over Rakan Al-Saloum in the quad class to nearly 10 minutes.

The event is being staged under the patronage of His Royal Highness Prince Saud Bin Abdul Mohsen Bin Abdul Aziz, Governor of Ha’il, President of the Supreme Commission for Ha’il Development and the Head of the Supreme Commission of the Ha’il Rally. The Saudi Arabian Motor Federation (SAMF) runs under the chairmanship of His Royal Highness Prince Sultan Bin Bandar Al-Faisal and the event is being organised in conjunction with the High Authority for the Development of Ha’il.

The final selective section takes place on Thursday morning before the finishing ceremony at the Maghwat Conference Centre from 19.00hrs on Thursday evening.

Some two months after the 2013 Dakar Rally ended in Santiago de Chile with the second consecutive win of the Monster Energy...
Copyright 2011-2016 Rallyraid.net - RISE Network. All Right Reserved.
Back to top