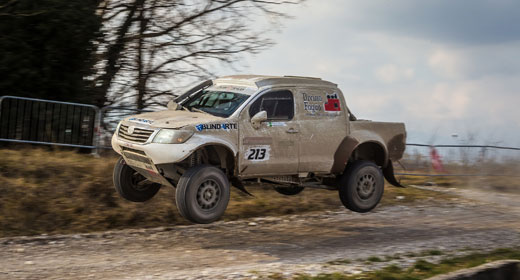 Cold, rain, traces of snow, ice: all of these elements were not enough to cool down Reinaldo Varela and Gustavo Gugelmin spirits on their T1 debut – the strongest class at the FIA World Cup for Cross Country Rally. After three Special Stages between Zoppola and Spilimbergo, at the Pordenone region in Italy, the Divino Fogao Rally Team crew secured partial leadership on the 2013 Italian Baja thanks to a 37 seconds advantage over Krzysztof Holowczyc (POL) and Andreas Schulz (GER), who clocked 1h35m39. The season opening round finishes tomorrow (Sunday 17th) again on the same roads but with competitors running on the opposite direction comparing to today.

After weather forcing organisers to cancel part of the official opening ceremony it was announced that today´s special would happen on the itinerary reserved for tomorrow. That meant cars and bikes being driven through the Tagliamento river, in other words, four wheel vehicles going through water level that reached its doors.

“It was a learning day today and, literally, we navigated on the river”, mentioned Reinaldo Varela at the end of the day. “Upon the weather conditions and the river patch we faced today I was forced to discover my car´s limits as far as brakes and traction are concerned. The Overdrive Proto is the first car with sequential gearbox I drive in my career..”

Co-driver Gustavo Gugelmin also had his moments when getting acquainted with new weather conditions:

“I had never competed on situations like those we are facing in Italy. After the first leg we changed our communication code to help Reinaldo go faster over the several 90° corners. Once again he made it clear his skills, this time in a car he had never driven before and is mechanically wise much more sophisticated comparing to out T2 car from last year, thanks to the T1 rules.”

The 2013 Italian finishes tomorrow (Sunday, 17th) and might well mark a double win for Brazil as Marcos Moraes and Du Sachs are T2 Class leaders. 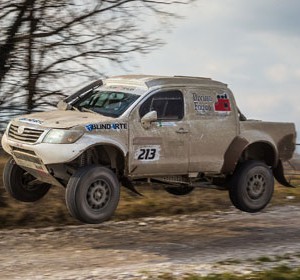 Brazilians lead the second Leg both in class T1 and T2with their “cariocas”. Frantic day for Gadasin, admitted to start....
Copyright 2011-2016 Rallyraid.net - RISE Network. All Right Reserved.
Back to top