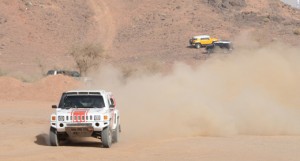 The international crew began the final leg on Thursday trailing Saudi Arabia’s Yazeed Al-Rajhi and his French co-driver Alex Winocq by 1hr 25min 54sec and looked set to settle for second position while the local hero stormed to his fourth win in Ha’il in five years. But the flying Hummer driver crashed heavily in the sand dune 50kms into the stage.

The Hummer landed on all four wheels with a hard impact and moved a few metres before stopping. Al-Rajhi complained of back pain and the crew were transferred by medical helicopter to hospital for observation. Thankfully the report was positive and there were no injuries.

Al-Rajhi’s crash opened the door for Zapletal to become the first European driver to win the event in its eight-year history. His winning margin was 46min 24sec. “Obviously it is disappointing for Yazeed to retire in such a manner on the last stage after leading for so long, but that is rallying. It is a great feeling for us to come here and win on such a difficult rally. The stages here are as good as anywhere in the world and to become the first non-Arab driver to win here is a great thing.”

Saudi’s Khalaf-Saleh Al-Joaan held off the challenge of numerous local rivals to claim a distant second position in his Toyota and Ahmed Al-Shaqawi finished third. First day delays cost 2007 event winner Rajih Shammeri his chance of finishing on the podium but the Nissan driver reached the end in fourth place.

Farhan Al-Ghaleb Al-Shammeri began the day down in 23rd overall and started the stage from 18th position. The Saudi pushed hard from the start and reached the finish in 2hrs 31min 30sec and earned the fastest time of the day. 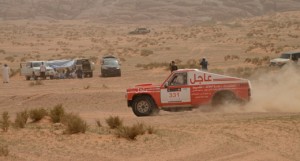 Saleh Al-Saleh endured a miserable Ha’il appearance in his Saudi Toyota and the local driver stopped at a similar point to Al-Rajhi in the sand dunes and was also joined by Abdullah Al-Ghashish. Abdul Al-Saleh, Ahmed Al-Shammeri and Ibrahim Al-Muhana all stopped on the stage and a disappointing rally ended prematurely for the UAE’s Yayha Al-Helai and Khalid Al-Kendi after another day of problems.

The UAE’s Khalid Al-Falasi and Atif Al-Zarouni took useful leads in the motorcycle and quad categories into the final selective 193km section and both held on to take the wins in their classes. Al-Falasi set the day’s fastest time of 1hr 34min 41sec to beat Abdulaziz Al-Hazlool by 9min 21sec, but the Saudi had done enough to snatch second place from Adel Al-Shaybani. Al-Falasi’s winning time in the motorcycles was an impressive 20min 42sec.

The event was staged under the patronage of His Royal Highness Prince Saud Bin Abdul Mohsen Bin Abdul Aziz, Governor of Ha’il, President of the Supreme Commission for Ha’il Development and the Head of the Supreme Commission of the Ha’il Rally. The Saudi Arabian Motor Federation (SAMF) runs under the chairmanship of His Royal Highness Prince Sultan Bin Bandar Al-Faisal and the event is being organised in conjunction with the High Authority for the Development of Ha’il. 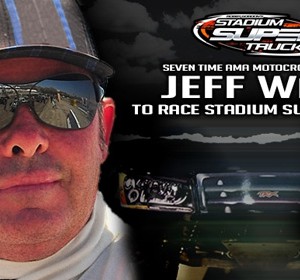