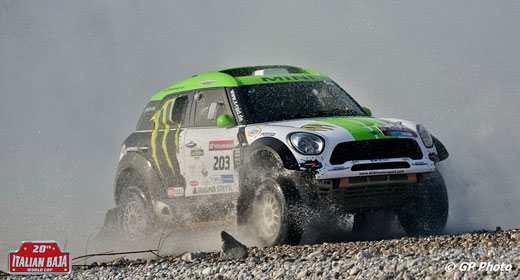 The Super Special Stage tasted as a big surprise. Technical checks’ results penalized the whole G-Force Team, which wasn’t allowed to start. Instead of catching points, Basso catches the flue and gives it up

What really happened goes beyond our imagination: a whole Team wasn’t allowed to start because of a non- conformity in the turbo device, as from the results of today’s technical controls. G-Force Team means Boris Gadasin, Vladimir Vasyliev and Bogdan Novytskyi, three favorites drivers supposed to easily gain the podium in the Overall Rank. Odd years seem not to be always so lucky for the “Zar” of Saint Petersburg, who declares: “I absolutely don’t agree with this decision. I will demonstrated we are right and will win in any case (the World Cup). It seems as someone doesn’t love us”. Sharp and contradictous answers.

Challengers could avail themselves of the occasion, first of all Krzysztof Holowczyc with his Mini All 4Racing, the Bmw secret weapon to fight along Cross Country routes. He got in fact the best time in the Super Special Stage “Royal Beach” in 6’27’’4 along the 7,75km track covered on the Meduna area from Cordenons to Zoppola, closely followed by Reinaldo Varela (Overdrive Proto) in 8’’6 and Ruslan Misikov (Toyota Hilux) in 15’’7. First among Italian driver the champion in charge Lorenzo Codecà (Suzuki), who seized the 7th place in the Overall Rank.

Bike race was leaded by Alessandro Ruoso with a Yamaha of the Offroadmotors Fox Shox Team (whose name is longer than the time it got…) with a time of 6’06’’5, ahead on “the King” Stephane Peterhansel (Yamaha Motor France), who seized just the fourth position in 17’’2, a time clearly due to his carefulness in facing an unusual track, totally different from the African and South American deserts. Among bikers participating in the FIM World Cup, today’s second place is reached by Alex Zanotti ™ in a time of 17’’2, while the third position is seized by Alessandro Botturi (Yamaha) in 20’’6. What about Alberto Basso? Missing. The biker from Porcia couldn’t come back from Slovakia, from his Company main office, because of a high fever which obliged him to stay in bed just on his favorite race’s eve. Amen.

CHANGES. Organizers had to modify the track competitors will face on Saturday and Sunday, because of the prohibitive river conditions, in particular at the intersection between the Tagliamento river and the Cosa torrent. Changes are therefore: tomorrow’s cars new starting: “Mosaico A” (8.30am, 1.35pm, 4.00pm) always from Dignano, and “Mosaico B” (9.15am, 2.20pm, 4.45pm). On Sunday, “Rauscedo A”, with the same start in Zoppola (10.45am and 2.30pm) and “Rauscedo B” (2.30pm and 3.10pm).

Today in the afternoon (Wednesday 13th March) the 2013 Desafío Ruta 40 rally was officially launched in Buenos Aires, an event...
Copyright 2011-2016 Rallyraid.net - RISE Network. All Right Reserved.
Back to top