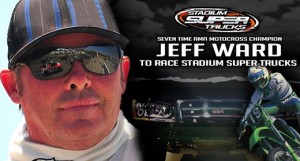 Jeff Ward, the first motocross rider in history to win every major AMA motocross national championship (125cc, 250cc, 500cc), and who later earned national acclaim on four wheels in both IndyCar and Off Road racing, has entered the Inaugural event of Robby Gordon OFF-ROAD’s Stadium SUPER Trucks™ April 6 at University of Phoenix Stadium in Glendale, Ariz.

Ward, of Newport Beach, Calif. will belt himself in one specially engineered 600-horsepower Stadium SUPER Trucks with full intent to challenge for a historic win in the series opener.

“After my motocross career I headed right for cars, and ended up driving six or seven races for Dodge and Walker Evans in the Mickey Thompson Series,” Ward said. “It will be great to be back inside a stadium setting. It’s been way too long, and I have to thank Robby (Gordon) for bringing it back. It’s like motocross with a cage and I really enjoy competing in Off-Road. “

“With the SST Series, it’s going to get us all back together with guys like Robby, Ricky Johnson and some of the guys I’ve banged bars with in the past. We’ll get out there and do it again, and we’ll get those rivalries going. It doesn’t happen too often where different athletes from different sports get together to compete and show the respect we have for one another as we do. This is going to be a lot of fun. It’ll be a great show for the fans.”

Gordon’s Stadium SUPER Trucks is modeled after the late Mickey Thompson Off-Road Championship and will take off-road racing to 12 state of the art stadiums across the country and abroad offering the champion a year-end prize of $500,000.

An elated Gordon commented on Ward committing to compete at Phoenix, and possibly other races.

“I have a lot of respect for and I’m really excited to have a star like Jeff Ward in the series,” Gordon said. “This is the perfect place for Jeff and the rest of us to go out, and put on a show that fans will be talking about for years to come – just like they’re still talking about some of the great battles in the Mickey Thompson series so long ago. And Jeff was a part of that incredible history.” 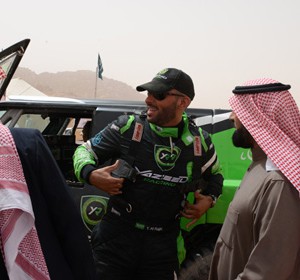 Saudi Arabia’s Yazeed Al-Rajhi overcame his engine scare at the end of the second leg to again dominate proceedings after...
Copyright 2011-2016 Rallyraid.net - RISE Network. All Right Reserved.
Back to top