KTM Motorsports has announced a new era for its factory rally team, which as of 2013 will ride under the name of Red Bull KTM Factory Racing.

The new team will field a strong three-rider lineup of Marc Coma, Ruben Faria and Kurt Caselli. The KTM factory team presence will be further enhanced by top Chilean rider Francesco ‘Chaleco’ Lopez who will be supported with a full factory package. Lopez will be competing on the same factory rally machine as the other three riders.

“Just as we always look to the future by constantly developing our rally bikes, we must also do that same with the structure of our factory team. It is essential to evolve, to engage new talent and have the kind of balance and harmony essential for the smooth operation of the team in extreme circumstances like the Dakar Rally,” said Pit Beirer, head of KTM Motorsports. “We want to capitalize on the immense experience and talent of riders like Marc Coma, but also need to take advantage of those of ambitious up-and-coming riders like Caselli, Faria and Lopez.”

Coma of Spain, a three times Dakar winner was unable to ride in the 2013 edition because a shoulder injury sustained in a crash in the Morocco Rally had not completely healed. He is now fit and is preparing to defend his World Championship Cross Country Rally title starting with the Abu Dhabi Desert Challenge (April 4-11). He and his now former KTM factory teammate Cyril Despres between them have dominated the Dakar, winning a total of eight titles of KTM’s 12 consecutive wins in what is certainly the world’s toughest rally.

Portuguese rider Ruben Faria, long time support rider to Despres enjoyed a very successful 2013 Dakar in his own right, finishing overall second, including a stage victory. Kurt Caselli, KTM’s offroad specialist and US factory rider was called in at the last minute to ride for the injured Coma. He delivered an impressive performance in his first Dakar appearance, including two stage victories. The popular Chilean Lopez was in great form on a KTM 450 Rally bike in the 2013 edition, finishing overall third with four stage victories.

Beirer underlined that KTM had enjoyed a great era with the Coma-Despres partnership in the factory team but underlined that when a rider of the high caliber of Despres indicated that he wanted to move on and face new challenges that the company had to respect his wish. He said KTM had experienced an era of unprecedented success while Despres has been a member of the company’s factory rally team. “His exemplary achievements are recognized throughout the world of motorsports and he will always be part of the history of our company. We thank him for his contribution and I join with everyone at KTM Motorsports and our entire company to wish him well for his chosen future.”

Looking forward, Beirer emphasized that it was important to remain open-minded and embrace change. “We must invest in new talent, just as we invest in new technology and I am confident that with the new team structure we will continue to play a dominant role in rally sport.” 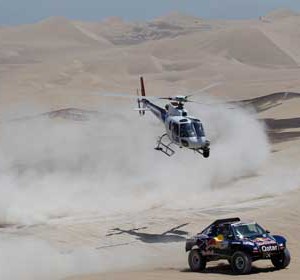 Nasser Saleh Al-Attiyah will defend his Sealine Cross-Country Rally title in the car in which he challenged for honours in this...
Copyright 2011-2016 Rallyraid.net - RISE Network. All Right Reserved.
Back to top