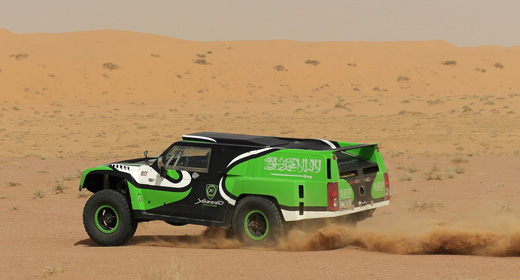 Already well established on the rally scene, the Belgian MY Racing team has decided to add a new string to its bow. Having acquired two Hummer H3 built and developed by the Robby Gordon Motorsports team, the Huy based team intends developing its activities in the rally-raid world.

The Dakar. The Silk Way Rally. The Pharaohs Rally. The Abu Dhabi Desert Challenge. The Sealine Cross Country Qatar. So many reputable events that require no introduction for the rally raid aficionados and specialists in the discipline. Whether it be at the level of the FIA World Cup Rally and Off-Road or non-championship events such as the renowned Dakar, rally-raid remains an extremely popular discipline.

A motorsport discipline that is also capable of generating emotions. To associate the concept of adventure with performance, and to enhance team spirit and human qualities. MY Racing’s acquisition of the two Hummer H3 built by the American Robby Gordon’ team as also two ultra equipped assistance trucks together with a substantial amount of parts, is part and parcel of our commitment to development”, a highly enthusiastic Charles Deffontaines, the new Operational Manager of MY Racing team, located in Huy (Belgium) commented.

Even though up until now victory might have eluded the Hummer in the most renowned of all rally-raids, namely the Dakar, its performance did not go unnoticed. “ Having reviewed the latest FIA rally-raid regulations, to us the Hummer appeared to be the vehicle offering the best potential”, the man in charge of the Belgian team continued. “Being in reality a large buggy with two-wheel drive and with for example a wheel clearance larger than a 4×4, the Hummer H3 has already won numerous stages in the Dakar. Constructed originally on the basis of the American ‘Score’ regulations, the Hummer will as from now appear under an FIA label and as such can be entered in a larger number of events.”

On the technical front this transition to FIA regulations necessitates the fitting of a different engine. “ In the Dakar the Score regulations allowed for engines benefitting from various developments. This is not the case in the new FIA regulations”, Charles Deffontaines continued. “In collaboration with the RGM team we opted to fit our first Hummer with a standard Chevrolet Corvette engine. This LS7 type engine is a V8 with a 7 litres capacity, as fitted in the road-going Corvette Z06. It develops 350 bhp with a torque exceeding 600 Nm with the mandatory 37,2 mm restraint, which can be increased to 39 mm for the Dakar. Other modifications were also made to the Hummer, notably to the roll bar. It goes without saying that other modifications still need to be carried out in consultation with the FIA obviously.”

Remaining faithful to the policy that has been its success in traditional rallying, MY Racing will be offering a “turnkey” formula in rally-raid, in other words a full service ranging from logistics through to technical assistance, not forgetting sport’s management and coaching. “Knowing MY Racing perfectly, which is also a partner of the Yazeed Racing team for its programmes in the World Rally Championship in WRC-2, as also in the Middle East Rally Championship, Yazeed Al-Rajhi has decided to place his trust in us for this new challenge that will also be his”, the MY Racing Operational Manager follows on. “ Together with Yazeed, we defined an ambitious rally-raid programme for the 2013 season. This programme kicks-off with an event Yazeed knows well, namely the Hail Rally, in Saudi Arabia. And the participation of Yazeed Al-Rajhi with the MY Racing Hummer in the 2014 Dakar has already been confirmed. The conversion work of our second Hummer to meet the FIA norms has also already started, and will be available in just a few week’s time.”

Having proved itself in the field of traditional rallying, MY Racing also has every intention of rapidly acquiring acclaim in the rally-raid world. Similar to its presently confirmed client, the team has no lack of ambitions! 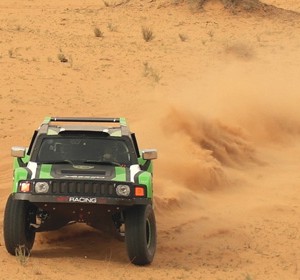 Present in Saudi Arabia at the request of the MY Racing team, Robby Gordon did not hold back when it came to advising Yazeed...
Copyright 2011-2016 Rallyraid.net - RISE Network. All Right Reserved.
Back to top