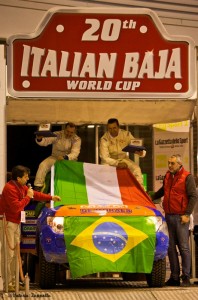 The Ralliart team, 2012 T2 World Champion wins the top of the league after the first leg of the FIA World Cup Cross Country Rallies with the Brazilian Moraes and the Portuguese Branco

The FIA World Cup Cross Country Rallies kicked off the weekend just ended in Pordenone with the 20th Italian Baja’s edition. Ralliart Off Road Italy Team, 2012 T2 champion with the driver Reinaldo Varela, currently at first place in world ranking, has finished on the T2 podium dominating the race with the Brazilian crew formed by Marcos de Moraes and Eduardo du Sachs, first overall in the category, and the Portugueses Rómulo Branco and João Serôdio, who finished in 2nd place.

The Team Ralliart carries on a journe y full of victories and adds another podium to those of last year, when the Team won four in five European races.

At Italian Baja, Moraes made a fast and constant race with the T2 Mitsubishi Pajero, winning the 1st place in 4 specials and being always among the first in the rankings. The Portugueses Rómulo Branco and João Serôdio, for the first time with the Mitsubishi Pajero of Ralliart Team, fought until the end and finally they finished in T2 2nd position, just 30 seconds from the first. Even the champion Javier Foj, who won the T2 title in the last two Dakar, failed to beat the two RalliArt crews and finished the race in 3rd position, demonstrating the great power, speed and reliability of Mitsubishi Ralliart vehicles.

Good race for Elvis Borsoi too, 3rd in 2012 T2 World Championship with Ralliart, and his navigator Stefano Rossi. Wit h the Mitsubishi Pajero they were ranked 6th in T2. The crew won four specials and 3 second places and, if it didn’t have had a flat tire losing precious minutes, they would definitely have earn the podium. Fifth overall in the T2 World Championship the brothers Lucio and Carmine Salvi, always in the top ten.

Ralliart Off Road Italy Team is ready for the next leg of the World Cup, the Abu Dhabi Desert Challenge, which takes place between the desert dunes from 4th to 11th April, and for the next: the Sealine Cross Country Rally from 20th to 26th April, the Baja España Aragón from 19th to 21st July, the Hungarian Baja from 15th to 18th August, the Baja Poland from 29th August to 1st September, Pharaons International Cross Country Rally from 29th September to 5th October and Baja Portalegre 500, 1st and 2d November.

In addition to the World Cup, Ralliart Off Road Italy will p articipate in the “RALLY GREECE OFFROAD”, the competition set in the hinterland of Greece that takes place from Friday 24th to Sunday 26th May, in Silk Way Rally in Russia, and in the Dakar 2014.

For its 35thedition, the 6th to be organised in South America, the Dakar will set off on 5th January from Rosario in Argentina...
Copyright 2011-2016 Rallyraid.net - RISE Network. All Right Reserved.
Back to top