The Toyota Saudi Rally Team is determined to achieve success in the Ha’il International Rally, the Kingdom’s flagship FIA-sanctioned off-road rally, which will run for nearly 1000 competitive kilometres through the north-central region of the Kingdom of Saudi Arabia from March 21st-28th.

Ever present in the event since its inception in 2006, the Saudi Toyota Team has strength in depth and will field a prototype Toyota FJ Cruiser for Mutair Al-Shammeri and a second Toyota FJ Cruiser Racer for Saleh Al-Saleh. Al-Saleh drove the prototype version last season. 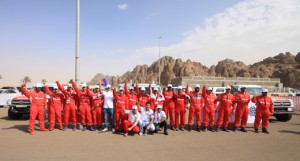 Farhan Al-Shammeri won the very first Ha’il Rally in 2006 and Rajih Al-Shammeri continued the superb run of consistent form by taking victory in the first of the international status events in 2007 with support from the Abdul Latif Jameel Co. Toyota has since gone on to take second and third-placed finishes on the event, with 1995 FIA Middle East rally champion Abdullah Bakhashab returning to competitive action in 2010 to claim the runners-up spot. Mutair Al-Shammeri confirmed a similar finish in 2011 behind Qatar’s Nasser Saleh Al-Attiyah.

“We have chosen Mutair Al-Shammeri to allow Ha’il youth to lead the team rather than hiring foreign drivers for this task,” said Adil Izzat, executive manager of the marketing division of Abdul Latif Jameel Co. “This step consolidates the success of the Toyota programme for Ha’il people sponsorship and gives us the chance to stimulate the participants of the Toyota programme and encourage people to utilise Toyota vehicles.”

The Saudi Isuzu Rally Team will also compete in the T2 category in the Ha’il International Rally, following a recent announcement at Bakhashab Brothers Holdings in Jeddah.

Sami Al-Shammeri and Abdulaziz Elieich will drive the two cars under the team management of Abdulrahman Aharaki. Isuzu managed to achieve a second-place finish in the T2 category of the Pharoahs Rally in Egypt and is planning on tackling the Abu Dhabi Desert Challenge.

“We will participate for the fourth time in the Ha’il Rally this year,” said team manager Aharaki. “We have two cars that have been prepared at Bakhashab Brothers in Jeddah using the expertise of professionals who know what to expect from the demands of the Ha’il Rally.”

Scrutineering and documentation will take place at the Maghwat Conference Centre on Friday, March 22nd and Saturday, March 23rd and this will be followed by the pre-event press conference and a permitted period to carry out the reconnaissance of the super special stage on Saturday afternoon.

The ceremonial start and super special stage take place on Sunday, March 24th. The first of four desert selective sections gets underway on Monday, March 25th and the competitive action finishes on Thursday, March 28th, with the finishing ceremony rounding off proceedings at 19.00hrs. T

Entries are open for vehicles complying with FIA T1, T2, T3 and T4 regulations. There will also be a two-wheel drive category within the T1 section and another category for diesel cars. The closing date for entries will be Monday, March 19th. There will also be three categories in the motorcycle section – below 450cc, above 450cc and quads. 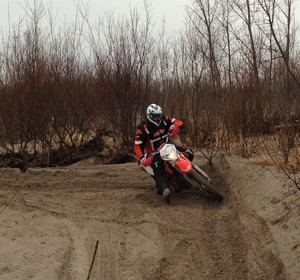 The Russian bike team “Troyka” will open a sports season 2013 in Italy, at the first stage of the FIM World Cup of Bajas...
Copyright 2011-2016 Rallyraid.net - RISE Network. All Right Reserved.
Back to top