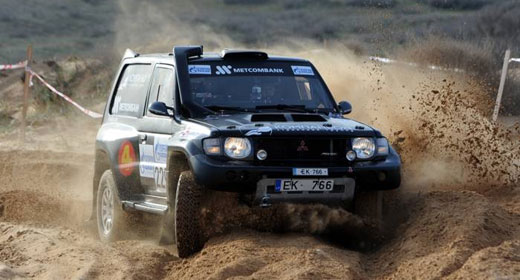 The main goal for 4RALLY team’s pilot Pavel Loginov on the past Russian event “Gold of Kagan 2013”, held in Astrakhan from 17-20 of April was the training before “Silk Way Rally 2013″, however results became much more better then planned. The crew Pavel Loginov/Andrey Rusov crew won first place in the category “Raid Sport” (special category defined in Russian regulations for partly improved T2 cars) on the car of Mitsubishi Pajero.

The race has shown a good dynamics in quantity and structure of participants, and on a sports component. Two years ago the organizers just dreamed about fifty crews and this year there was more than one hundred participants both in cars and bike categories.  Race became really difficult and demanded serious work from the pilots and co-pilots. Just noted that in the last day eight crews couldn’t reach the finish – there were several “roll over”, technical problems and loss of physical endurance and concentration.

In these conditions, performance of crew of Pavel Loginov and his navigator Andrey Rusov, who passed a 1000-kilometer route without technical breakage, made impression and was naturally reflected in result which became the best in the category “Raid Sport”.

On the Prologue, a short qualification special stage, black Loginov’s Mitsubishi started only the 25th, on the seriously damaged track. Many crews in this day stacked on a sandy piece near the finish, but Loginov passed all traps without doing a stop and came up to the second place in the category. Next day it was quite good for adapting to the car and the tracks, and finally on the third day Loginov pushed a pedal even more and reached the first place in his category.
The sports menu of day engaged a 275-kilometer special stage filled with a sharp Astrakhan mixture from technical twisty roads with holes, springboards and bumps.  There was just a little portion of sands, so the most important was car’s resource and skill of high speed piloting.

Logins / Rusov caught up the Latvian crew Maris Vilcans who was in the lead in the category “RS”. On one moment Maris took the wrong direction on the turn  and put his car on side. Pavel made the decision to stop and help Latvians, despite the competitive battle. By results of the day, the 4RALLY rose on the first place and improved the result in the general standings.

On final day competitors used a route of the second stage of the race but in the opposite direction. In the menu of day along with a running bumpy steppes there were two sand dunes named  “The big brother” and “Africa”.
During this special stage Pavel Loginov had a problem with the engine – loss of power!  Only the high level of co-pilot’s work without any mistakes and the bright piloting showed by pilot helped to win!

“Excellent race, magnificent organization! I am very glad that in Russia we have such level of competition which allows to be fully prepared for serious international. In four days we were successfully trained, tested race car and now we are looking forward for start of “Silk Way Rally 2013”. 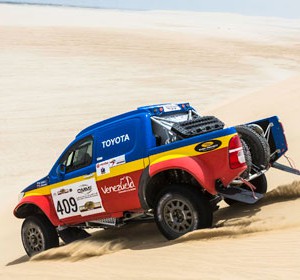