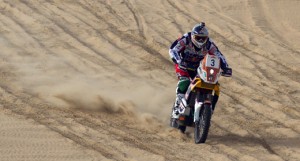 Qatar’s former Dakar Rally winner Nasser Saleh Al-Attiyah and recent Abu Dhabi Desert Challenge and triple Dakar winner Marc Coma head the car and motorcycle entries for next week’s Sealine Cross-Country Rally, the third round of the 2013 FIA World Cup for Cross-Country Rallies and round two of the FIM Cross-Country Rallies World Championship, which is taking place across the Qatar deserts on April 22nd-26th.

The official entry lists were published today (April 15th) and many of the world’s finest off-road rallying exponents from the world of both car and motorcycle racing will experience the heat and rigours of the southern Qatar deserts.

The Qatar Motor & Motorcycle Federation (QMMF) is delighted to announce that a provisional 35 cars, 14 motorcycles and six quads will compete in the event. Entrants will arrive in Qatar from as far afield as Venezuela, Chile, the USA, Uruguay, Bolivia, New Zealand, Australia, Colombia, Kazakhstan, Brazil and Europe and the Middle East to set the scene for a truly international rally.

“We are delighted to see so many top class names from every corner of the world on the entry list and making their preparations to come to race in Qatar,” enthused QMMF president Nasser Khalifa Al-Attiyah. “Our team has laid on a new, challenging route and fine-tuned the event to make it a unique challenge for our competitors.”

Three-time Dakar winner Marc Coma tops the motorcycle contingent and will be on a high after winning last week’s Abu Dhabi Desert Challenge. Dakar rivals Francesco Lopez and Pal-Anders Ullesvalseter will offer the main competition to the Spaniard, while Qatar’s Adel Hussain will be hoping to win the quad category with his Suzuki ATV.

Dutchman Peter van Merksteijn will take part in the event for the first time as part of the Wevers Sport Team at the wheel of a HRX Ford. The Twente-based driver hopes to follow in his father’s footsteps in this rallying discipline after tackling WRC events in his early career. He teams up with Belgian co-driver Eddy Chevallier to try his hand at the Qatar event.

“It’s great to be able to compete at the highest level,” said the Dutchman, who planned to test his car in the UAE before the Sealine CCR. “If you want to reach the very top you need to dedicate full-time to rally sport. I cannot afford that, so cross-country rallying is a marvellous challenge and a little less time consuming. Our ultimate goal is senior and junior (father and son) at the start of the Dakar.”

Qatar’s Sheikh Hamed bin Eid Al-Thani, the winner of the FIA Middle East rally series in 1993, has teamed up with regular MERC driver Edith Weiss to tackle the Sealine event. Weiss will switch to co-driving duties and the pair will take part in a Nissan Patrol T1, although they are planning to tackle more events together later in the season in a T2 Porsche Cayenne from Hock Racing in Germany.

Administration checks, scrutineering, the initial briefing and the pre-event press conference for the Sealine Cross-Country Rally will take place at Losail International Circuit, north of Doha, on April 21st and April 22nd.

The ceremonial start will then get proceedings underway on Doha Corniche on Monday, April 22nd and the first of four desert legs begins on Tuesday, April 23rd. Action draws to a close on Friday, April 26th. 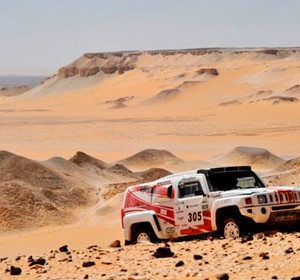 Less than 6 months before the start under the shadow of the Pyramids of Giza, the organizers of the Pharaons Rally are glad...
Copyright 2011-2016 Rallyraid.net - RISE Network. All Right Reserved.
Back to top