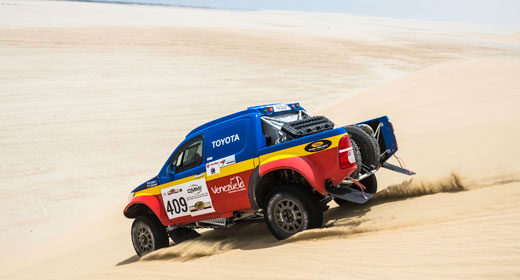 Overdrive Racing’s Nunzio Coffaro and Aidyn Rakhimbayev finished a fine third and fourth overall in the Sealine Cross-Country Rally, round two of the 2013 FIA World Cup for Cross-Country Rallies, which finished in southern Qatar on Friday (April 26).

The Belgian team entered four Toyota Hiluxes in the gruelling four-day event across some of the most remote areas of the State of Qatar and two of the cars reached the finish in the top four behind race winner Jean-Louis Schlesser of France and runner-up Krzysztof Holowczyc of Poland.

The Venezuelan pairing of Coffaro and his co-driver Daniel Meneses finished third overall in their Toyota after setting some competitive times from the outset. Their challenge for honours came with the invaluable support of Venezuelan Tourism, the Ministry of Sport and PDVSA. They were fourth quickest on the final stage.

Running under the Team Astana banner, Kazakh Rakhimbayev and his Russian co-driver Vladimir Demiyanenko reached the finish podium at the Sealine camp in fourth position and set a second fastest time on the third stage, despite this being their first experience of the Qatar desert and its demanding navigation. Rakhimbayev was fifth on the last timed selective section.

Poland’s Martin Kaczmarski and Bartlomiej Boba set one second fastest time and were lying third overall when ill health sidelined the driver at the start of the third stage on Thursday.  But a night of rest and recuperation was sufficient to enable the Pole to continue into the final day from 16th overall, despite a fistful of time penalties for missing a stage of the event. He was 10th quickest through the final 275.50km timed test after losing his way for a time.

The Brazilian duo of Reinaldo Varela and Gustavo Gugelmin suffered back injuries in a first stage dune accident and are currently arranging repatriation to their native Brazil to continue their medical treatment and rehabilitation.

“It was a good rally and we are quite happy to have a car on the podium and the second car in fourth position,” said Overdrive team manager Jean-Marc Fortin. “I was impressed with the performance of Aidyn and obviously disappointed for Reinaldo and Gustavo after their accident.

“Our cars proved their reliability once again. This brings to an end a very busy month for our team in the Middle East. The mechanics have worked very hard. I think every one deserves some much needed rest.”

Overdrive Racing received extensive support from Abdullah Abdulghani & Bros., the sole local distributor of Toyota and Lexus cars, for its challenge for honours in the Sealine Cross-Country Rally. 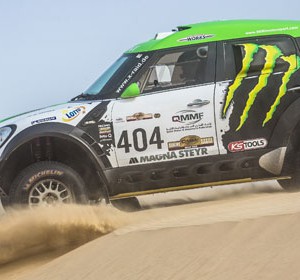 Qatar’s Sealine Cross Country Rally turned out to be a gruelling four-day battle: the demanding terrain that featured not only...
Copyright 2011-2016 Rallyraid.net - RISE Network. All Right Reserved.
Back to top