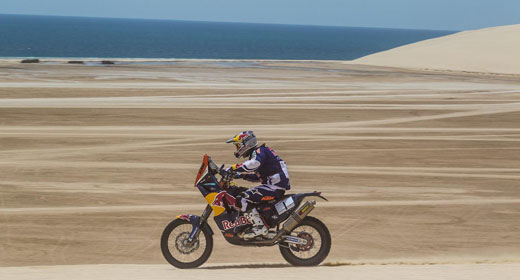 KTM factory rider and three times Dakar winner Marc Coma of Spain was the pace setter on the opening day of the Sealine Rally in Qatar to win the first of four hard stages in this, the second round of the World Cross Countries Rally Championship.

Fresh from his victory in the Desert Challenge, Coma said it was a difficult but satisfying day. “I am happy with the stage and I’m in a good position but it was a tough day with difficult navigation and it was necessary to stay focused. I had a good starting position and after I caught the riders in front I was able to open the race. It was perfect.”

Riders are in a bivouac in the desert near Doha and completed the first of four very long loop tracks that make up this year’s second edition of the Sealine Rally. In a new format this year, riders have one day less but a very heavy program with the timed special each day representing at least 97 percent of the total kilometers. Tuesday’s stage, which featured a range of fast and stony desert terrain and dunes, had a timed special of 405.12 km from a total distance of 415.11 km.

After an early morning start to avoid the searing heat desert heat, Coma completed the first stage in four hours 58.46 and crossed the line with a 2.04 advantage over Portugal’s Paolo Goncalves. KTM’s Norwegian rider Pal Anders Ullevalseter was third and Coma’s two KTM factory teammates Jakub Przygonski of Poland and Chaleco Lopez of Chile were fourth and fifth. The top five riders, all veterans of the Dakar Rally have already distanced themselves from the next group and there is 19-minute gap between Lopez and the sixth placed rider. Coma, Przygonski and Lopez are all riding the KTM 450 Dakar-winning Rally bike

Coma is looking to build on the world championship points he picked up in the Desert Challenge as he lays the foundation stone to retain his world title. Making a welcome return to racing after a shoulder injury kept him out of the Dakar 2013, Coma considers the early season as important confidence builders. Speaking to journalists after the ceremonial start on Monday evening Coma said: “I’m pleased with my riding. My navigation is strong, my speed is good and I know my fitness will be fine,” Coma said. “I will try to win again like last year. I feel that there’s a perfect route for a perfect race here.”

Wednesday’s Stage Two is the longest of this year’s edition with a total distance of 423.28 km including 413.19 km of timed special, relating to 99.5% of the total distance.

Nasser Al-Attiyah was handed no favours by the deserts of his native Qatar during the opening stage of the Sealine Cross-Country...
Copyright 2011-2016 Rallyraid.net - RISE Network. All Right Reserved.
Back to top