KTM’s three-times Dakar winner Marc Coma of Spain on Friday sealed victory in the second edition of the Sealine Rally in Qatar, the second round of the 2013 World Cross Countries Rally Championship. 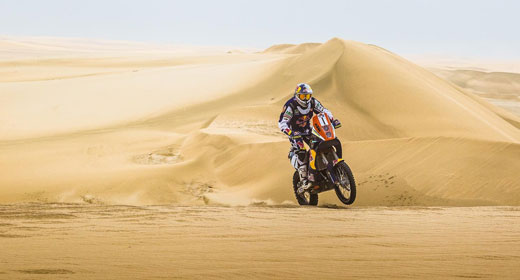 Coma won the four-stage rally by the narrowest of margins, finishing just 4 seconds ahead of Portugal’s Paolo Goncalves. The minor podium place went to KTM factory teammate Jakub ‘Kuba’ Przygonski of Poland and the third member of the KTM trio, Chaleco Lopez of Chile finished fourth. All three KTM riders were onboard the KTM Dakar-winning 450 Rally bike.

The top four riders finished the rally after four very long stages within 4 minutes 29 of each other underlining that this was a race of an entire different character. Run for the first time in 2012, the Sealine Rally, coming straight on the back of the more established Abu Dhabi Desert Challenge, was compacted from five to four days. But riders were on their bikes, trekking across the desert sand for around five hours a day in what was an all-out scramble for fastest.

Going into the final stage, Coma was very aware that it was going to be a close finish. He started the day with a 2 minute 4 second advantage over Goncalves. Then his Portuguese opponent lost some ground after a navigational error and Coma again had the advantage.  Knowing the win was at stake, Coma decided to take the cautious approach with the navigation and Goncalves was back in contention behind him at the 190 km mark of the 275 km special. From then on it was a dash by both riders to the finish and they crossed the line in unison, with the victory going to Coma by just 4 seconds.

Although he said it was very tough throughout the four days, Coma, making a return to racing after an injury problem that kept him out of the 2013 Dakar Rally was still happy at the close. “The long distance, the navigation, the weather – this race has really gone to a high level. I lost some time in some loose sand after the passage control, but I saw Paulo after about 190 km and it was exciting all the way to the finish,” he told reporters at the end of the race.

Coma’s slim victory here means he retains the title in 2013. Together with his win in the Desert Challenge, it lays the foundation for another solid attack on the 2013 World Championship title. 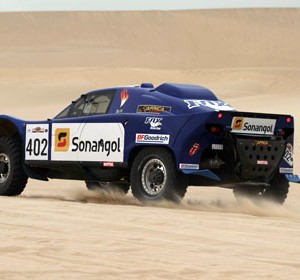