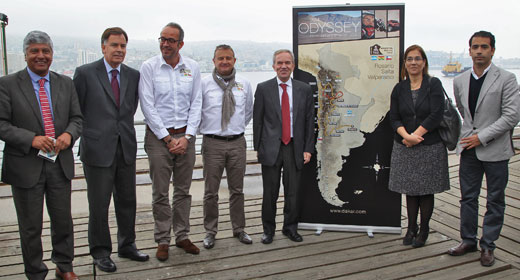 Five years after its initial visit for the rest day in the 2009 edition of the Dakar, this year the race will finish in Valparaiso, a striking and colourful city with World Heritage Site status. Get ready for the thrills…

The name ‘Valparaiso’ is one that captivates travellers who love beautiful bays. Apart from the visual spectacle it provides, for all the drivers/riders in the Dakar it represents the culmination of all the efforts made to prepare and undertake the race in its next edition. The bravest, luckiest and most determined will come together on January 18th in the “Jewel of the Pacific”. For the moment, the organisers have organised a presentation for the media and the Chilean participants on the Muelle Baron seafront promenade, which was attended by the Secretary of State for Sport Gabriel Ruiz Tagle and the mayor of the city. Apart from the magnificent podium that will be installed in Plaza Sotomayor on Saturday 18th January, Etienne Lavigne has revealed the names of the five bivouacs that will be visited in Chile before reaching Valpo. The most striking is El Salvador, 2,300 metres above sea level, in its first appearance on the route of the rally. “Our intention is to surprise the drivers and the riders with new tracks and dune ridges,” explains the director of the event, “and the geographical location of El Salvador will allow us to include some new sections. Basically, the arrival in Valparaiso will be very exciting for all of us, in a city that has already won us over with its beauty and character”.

Edition five of the Silk Way Rally features a mostly renewed route, exclusively designed with the pleasure of the competitors...
Copyright 2011-2016 Rallyraid.net - RISE Network. All Right Reserved.
Back to top