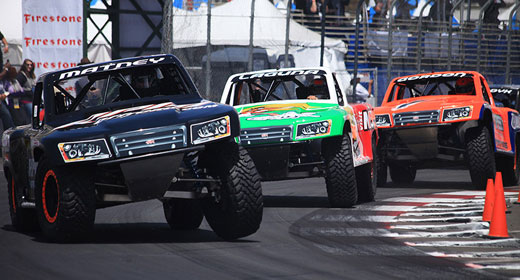 In a dominating performance, Justin Lofton overcame a practice mishap on Saturday by another driver to be the class of the field on Sunday on the way to winning his first ever SST race in the SPEED Energy Stadium SUPER Trucks Grand Prix of Long Beach.
As near perfect weather conditions blanketed Long Beach, Calif., the highly anticipated Round #2 of SPEED Energy Stadium SUPER Trucks took to the temporary constructed asphalt street course of the Toyota Grand Prix of Long Beach.

The starting line-up for the 10-lap SST Final would be determined by a complete invert of qualifying times in practice from Sunday morning. At the conclusion of the 20-minute practice session, Justin Lofton navigated through the 11 turns and over the four jumps of the 1.968 mi course the quickest of the 12 competitors with a blistering lap of 1:47:775. Nearly, two seconds faster than second place, Jeff Ward with a 1:49:615.

As the green flag flew in front of jam packed grandstands, Nick Baumgartner and Greg Adler paced the field with Baumgartner jumping out to an early lead. The trucks of Justin Lofton, Robby Gordon, and Rob MacCachren wasted no time moving to the front passing truck after truck. Trouble found Justin Matney on Lap-2 as he spun backwards going over one of the jumps causing trucks to scramble every which way. Adler took the worst of the damage as he retired from the race on Lap-3 with transmission issues.

A restart on Lap-4 bunched the field back up, but that did not hinder leader Lofton in the Weekend Warriors Productions Yokohama truck as he went right back to work where he left off hitting all his marks on the tricky course to pull away from second place. The action behind Lofton became heated as trucks were beating and banging into each other battling for position.

Justin Lofton would go on to secure his name in the record books as SPEED Energy Stadium SUPER Trucks winner of the Grand Prix of Long Beach followed by second place finisher Robby Gordon and points leader Rob MacCachren rounding out the podium.

After the race Lofton commented on winning Stadium SUPER Trucks Round #2:

“I’m super stoked to capture my first Stadium SUPER Trucks win. The outcome from Round #1 at Phoenix was disappointing, but to come out here today and put on such a dominating performance racing through the complete field is simply just awesome.”

“Hats off to my crew and the SST crew for getting the truck back together after being rolled 7 times the day before by a fellow driver. The safety and engineering of these trucks is something truly amazing. Robby did a fantastic job! I appreciate the Grand Prix of Long Beach for giving us the opportunity to race in front of all these fans. I hope we are invited to come back next year.” Stated Lofton.

Tickets to SPEED Energy Stadium SUPER Trucks at the Los Angeles Memorial Coliseum start at just $25 for adults and kid’s 12 & under ARE FREE with a purchased adult ticket at the stadium box office or through Ticketmaster at ticketmaster.com or 800-745-3000. USC Trojans Students can buy tickets for $10 through the stadium box office by simply showing their student ID’s.

Keep up with all the latest news and results on Robby Gordon OFF-ROAD’s Stadium SUPER Trucks Series by liking the series on Facebook at http://facebook.com/StadiumSuperTrucks as well as following on Twitter at http://twitter.com/SSuperTrucks. All information including where to purchase your tickets for the 2013 season can be found at http://www.stadiumsupertrucks.com. 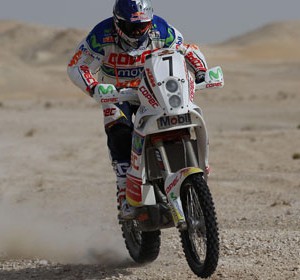