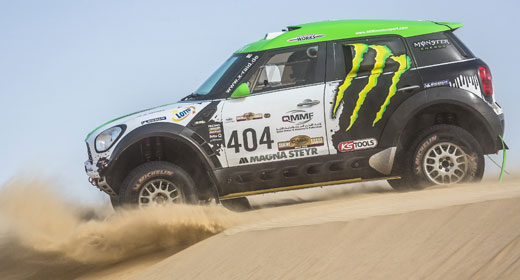 Qatar’s Sealine Cross Country Rally turned out to be a gruelling four-day battle: the demanding terrain that featured not only desert sand but also hard sections covered by rocks. And in addition, there was the extremely difficult navigation that exasperated numerous competitors. But the Monster Energy X-raid Team, its pairing Krzysztof Holowczyc (POL) / Andreas Schulz (GER) and the MINI ALL4 Racing successfully met all the challenges to finish runner-up behind the buggy of Jean-Louis Schlesser.

Having finished fifth in the Abu Dhabi Desert Challenge, Holowczyc travelled to Qatar with a lot of pleasant anticipation. In his white MINI ALL4 Racing, he made a good start into the third FIA Cross Country Rally World Cup round and finished second right away. In the second special stage he encountered two punctures but succeeded in defending his second position in the overall standings, nevertheless. On the following day, the problems were forgotten and he struck back by winning the third special stage. In the fourth and final special stage, the Monster Energy X-Raid Team driver once again set the second-fastest time to also secure the second place in the overall ranking.

“We once again succeeded in scoring World Cup points and doing so represented by No 1 priority, here in Qatar,” said Krzysztof Holowcycz. “The MINI ALL4 Racing ran perfectly and the collaboration with Andy also works better and better. He did a really great job, today. We were the first to start into today’s special stage and nonetheless, we completed it without any navigation mistakes. With the three rallies jointly raced, we have evolved into a really good team.“ 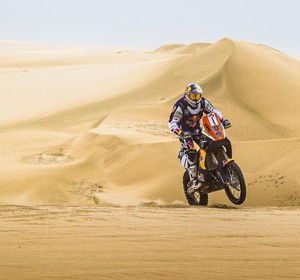 KTM’s three-times Dakar winner Marc Coma of Spain on Friday sealed victory in the second edition of the Sealine Rally in Qatar,...
Copyright 2011-2016 Rallyraid.net - RISE Network. All Right Reserved.
Back to top