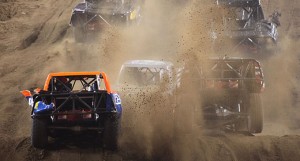 The Inaugural Stadium SUPER Trucks event at University of Phoenix Stadium in Glendale, Ariz. proved to be a rough and tumble one as drivers in four distinct divisions were tested with many unique obstacles throughout the high flying course. Rob MacCachren, Darren Migues, Eddie Tafoya, and Myles Cheek were able to overcome all challenges and mark their name in the record book as the first ever winners in Robby Gordon OFF-ROAD competition.

The 18-lap Stadium SUPER Trucks final was led to green by Justin Matney of Bristol, Va. who jumped out to the early lead before being over taken by Mexican off-road standout Lalo Laguna. Racing out to a 3 truck lead ahead of Matney on Lap 2, Laguna lost the handle on his #17 Vist Mexico entry allowing it to make contact and get stuck on the outside water barrier. However, the man on the move was the #21 of MacCachren rocketing from the sixth position to third in just one lap. 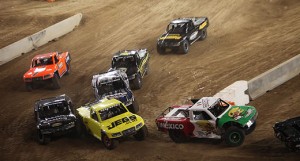 Quick Qualifier Justin Lofton, of Brawley, Calif., found trouble with Mike Jenkins in the #47 Traxxas truck coming off the second double resulting in Lofton rolling over on his side. On the restart, MacCachren set his sights on leader Matney, and was able power his way past to take the lead on Lap 4.

Lofton, found trouble once again on Lap 10, as a fire erupted underneath the hood of the #6 Imperial Valley Full Plate truck. On the restart, MacCachren blasted off to a four truck lead ahead of Matney and Phoenix, Ariz. native P.J. Jones. The final laps became a shootout for second as no one could catch MacCachren. Jones gave everything he had to get past Matney in the final corners, resulting in him losing control of his truck and flipping over.

MacCachren, raced the #21 Traxxas truck to victory in convincing fashion ahead of Mattney and Orange, Calif. native Robby Gordon.

In the SUPER Buggy feature Tafoya, of Chino Hills, Calif., was able to overcome a broken left front suspension and a late race charge by Robb Harvey, of Glendora, Calif. to race his way to victory in the ultra quick paced Stadium Buggy final.

Adrian Cenni, of South Hampton, N.Y. paced the field to green jumping out to ever so brief lead before spinning in turn one and scattering buggies in all directions behind. Tafoya took benefit from the stalled Cenni machine working his way past and stretching out to an early lead. Larry Foddrill battled with Tafoya for multiple laps before getting into the water barriers losing multiple positions.

The race came down to a last-lap shootout as Harvey was able to catch the ill handling Tafoya machine. The two went side-by-side with multiple calls with Tafoya prevailing to take the checkered flag ahead of second place finisher Harvey and third place Rob Martensen.

Tickets to Stadium SUPER Trucks at the Los Angeles Memorial Coliseum start at just $25 for adults with kid’s tickets available for $10 dollars off at the stadium box office or through Ticketmaster at ticketmaster.com or 800-745-3000.

All 12 Stadium SUPER Truck events in 2013 will be televised via tape delay and featured on NBC: seven on NBC and five to be televised on the NBC Sports Channel. Round 1 from University of Phoenix Stadium in Glendale, Ariz. will be shown on Sunday, April 14 at 3 P.M. et.

Keep up with all the latest news and results on Robby Gordon OFF-ROAD’s Stadium SUPER Trucks Series by liking the series on Facebook at http://facebook.com/StadiumSuperTrucks as well as following on Twitter at http://twitter.com/SSuperTrucks. All information including where to purchase your tickets for the 2013 season can be found at http://www.stadiumsupertrucks.com. 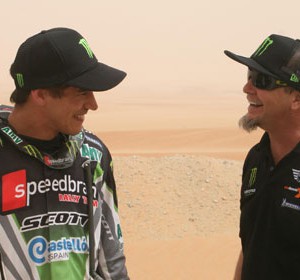 The quick Spaniard was eyeing a top three result when he felt a sudden pain in his wrist following a jump over a dune. Barreda...
Copyright 2011-2016 Rallyraid.net - RISE Network. All Right Reserved.
Back to top