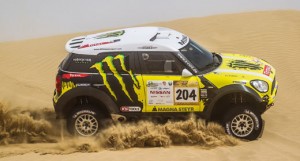 Spanish driver Nani Roma swept to the front of the pack in the Abu Dhabi Desert Challenge today while Dubai-based British rider Sam Sunderland overshadowed the world’s best on two wheels to take the lead in the bikes class.

Partnered by French co-driver Michel Perin in his Mini, Roma was fastest over the gruelling 250km ADNOC Special Stage 2 which sent the rally on a difficult passage through the giant dunes of the Rub Al Khali, and he finished it leading the cars class by 17 mins 10 secs from Brazillian Guilherme Spinelli. Accompanied by Youssef Haddad in a Mitsubishi ASX, Spinelli was 19 mins 31 secs clear of Dutchman Bernhard Ten Brinke and French co-driver Matthieu Baumel in third place in their HRX Ford X.  With another Dutchman, Erik Van Loon, slipping one place overnight to fourth, defending champion and six-times Desert Challenge winner Jean Louis Schlesser had a much better day after his problems on the first leg, climbing to fifth, although he was more than 50 minutes off the lead.

While a procession of cars and bikes became stuck in soft sand as the route wound its way through the spectacular but unforgiving dunes, Saudi Arabia’s Yasir Saeidan took his Polaris into seventh position, while the UAE’s Yahya Al Helei shrugged off his first leg setback to move into the top ten, and lead the T2 production class.

Roma completed the second leg to say: “It was definitely not easy and much harder than yesterday. I got stuck once and lost maybe seven minutes. But it’s ok – I’m feeling good at the moment”

Spinelli said: “This stage was more difficult than yesterday. I was climbing one of the biggest dunes in second gear and at the top I tapped my brakes slightly and got stuck. It cost us maybe ten minutes. But this is a very good experience for me as I’ve never driven in the desert before.”

The cars category was guaranteed a new leader today when Argentina’s Lucio Alvarez, who had won the Abu Dhabi Motorsport Management Special Stage 1, withdrew overnight after his Toyota Hilux Overdrive X T1 was deemed unfit to continue. It had been damaged when it rolled 2km from finish of the first stage. 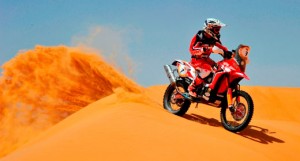 While many of the riders found the going particularly tough today, Sunderland produced a stunning performance, outpacing world champion Marc Coma throughout the stage and finishing with a lead of 2 mins 13 secs from the Spaniard, the defending champion in the Desert Challenge and six-times winner of the event.

“It was hot, very hot, but a good day,” said Sunderland at the finish. “I had to do a bit of extra navigation at the end but the bike is going really well. It was just nice to get out there after missing out yesterday.”

The result underlined the star quality of a rider who made his mark in motocross before moving into cross country rallying in 2011. He won two stages on the Desert Challenge that year, and two more on the Australasian Safari before being knocked out of the event by a kangaroo.

He made his debut in the Dakar Rally last year, and was seventh fastest on first stage before being forced to retire with a mechanical problem. He was prevented from taking part in this year’s Dakar after being injured during testing for the event.

The Desert Challenge, which is taking place under the patronage of H.H. Sheikh Hamdan bin Zayed Al Nahyan, the Ruler’s Representative in the Western Region, is the second round of the FIA World Cup for Cross Country Rallies for cars, and the opening round of this year’s FIM Cross-Country Rallies World Championship. 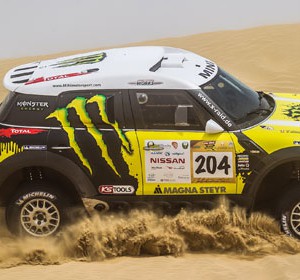 The first special stage of the Abu Dhabi Desert Challenge proved to be a difficult one for the Monster Energy X-raid Team....
Copyright 2011-2016 Rallyraid.net - RISE Network. All Right Reserved.
Back to top