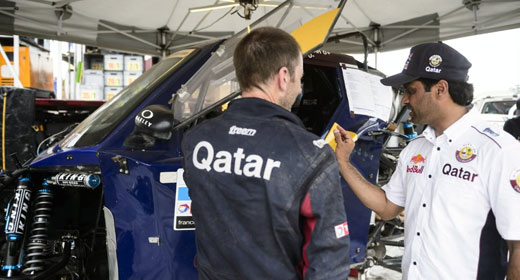 Nasser Al-Attiyah was forced to retire on the second stage of the Sealine Cross Country Rally after a stone punctured the oil filter of his V8 Buggy. The misfortunate incident ended Nasser and co-pilot Lucas Cruz’s efforts to defend the title they won in the deserts of southern Qatar last year.

The second stage got off to a flying start for the Qatar Red Bull Rally Team duo with their V8 Buggy comfortably the quickest car on the course. Nasser had promised to attack after losing time on the opening stage and was soon making up precious minutes on the leading pack.

With over 400km of competitive track to contest everything was going to plan as Nasser and Lucas sped past second placed Krzysztof Holowczyc early in the day. After passing through the first checkpoint of the stage the V8 Buggy was soon on the tail of race leader Jean-Louis Schlesser. The Qatar Red Bull Rally Team pair were able to exert pressure on the Frenchman until mechanical problems put pay to their pursuit.

Whilst cruising along a section of loose gravel a stray stone flew up from under the wheels of Nasser’s Buggy and punctured the vehicle’s oil tank. Nasser and co-pilot Lucas were powerless to prevent their entire oil supply leaking out of the engine and were forced to call it a day.

With all of their hard work undone by irreparable damage the V8 Buggy was towed back to the bivouac where the Qatar Red Bull Rally Team will carry out a full investigation of the problem in the coming days. Local hero Nasser was clearly disappointed by the premature end to his title defence in front of his home fans. However, the entire team remain determined to use this trip to Qatar to further the development of their V8 Buggy.

The Qatar Red Bull Rally Team will utilise their remaining days in the desert for testing as their long journey continues towards the 2014 Dakar Rally. 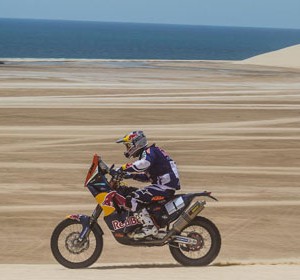 KTM factory rider and three times Dakar winner Marc Coma of Spain was the pace setter on the opening day of the Sealine Rally...
Copyright 2011-2016 Rallyraid.net - RISE Network. All Right Reserved.
Back to top