French organizer of Silk Way Rally, Frédéric Lequien performed a press conference last Thursday in Budapest, 2 days after that the detailled route has been published in Paris. The event was always very popular in the Central Eastern European region, that’s why the organizers wanted to propagate the rally in Hungary too. 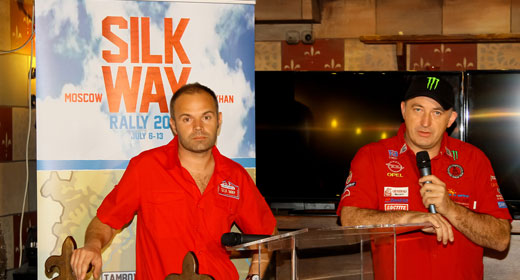 « By the organisation of the event, the most important point was to have a competitor-friend rally, what means more selectives sectors and less liaisons » – said Frédéric Lequien. « Besides we take care of the security in high level with five helicopteres, fifty doctors and one medical plane, to be sure that the 150 vehicules of the rally could race under the safest conditions » – continued the French organizer of the rally. Frédéric Lequien told also that the Russian government is fully supported the Silk Way Rally, as from the beginning of the event .

« Russia was always a mysterious place for me. I heard for the first time about the Red Square, the Gum store and the Kremlin in the elementary school, and during the last years I could see it, thanks to the starting podium of the Silk Way » – said Balázs Szalay, who finished last year in the second place. « Although when I hear someone talking about the Silk Way Rally, I always remember the finishing podium of the 2012 edition, when after the ceremony all of our team jumped into the pool with clothes celebrating one of our biggest international success. It will be hard to repeat it this year, as there will be a lot of good competitors to beat on the rally » – added the Hungarian driver.

This year there will be 3000 kilometers of selectives stages, and the major part of the route will be totally new. 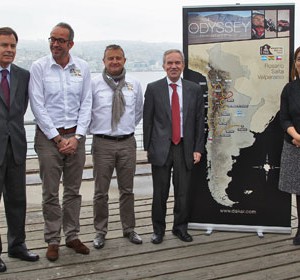 Five years after its initial visit for the rest day in the 2009 edition of the Dakar, this year the race will finish in Valparaiso,...
Copyright 2011-2016 Rallyraid.net - RISE Network. All Right Reserved.
Back to top