Huge amount of water and mud awaited the competitors at the Toolimpex Cup last weekend – and fantastic atmosphere, thanks to the fierce competition and the spectators tracing everything. The modifications of the winter offseason proved to be effective and HAWKIA performed very well: Olivér Sólyom and Mátyás Galbács finished third in their category. 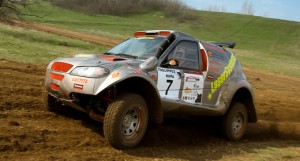 On Friday’s prologue the biggest surprise was the new gearbox, for two reasons. First, it worked flawlessly. But because the transmissions inside are completely different from the former ones this caused some confusion for Olivér. Then in the middle of the track because of the brakes getting wet the crew almost fell into a three meters deep concrete basin.

Olivér Sólyom: “Learn, learn, learn! If you think you know your car you compete with for years you can be sure you don’t. Before the rally I was able to drive only some kilometres with the car, I thought I understood its gears. It turned out not to be the case, I changed gears in a wrong way a lot of times. But to my greatest pleasure finally we managed to find a solution to our problem with the gearbox with which we were struggling for two years. The grey thing is a success!” 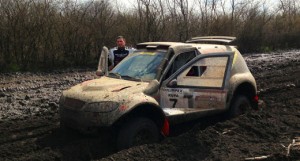 Saturday’s wet and muddy tracks took numerous victims, in the middle of the second special an 800 metre long section was so damaged by the cars in the front that it became impassable. Among others the crew Hangodi – Pocseg also became captive of the deep mud, and also the crew Sólyom – Galbács had to forfait, they also got stuck. Hangodi because of his other problems was able to return to the race only at the end of the day. But the crew of the HAWKIA after it was got out of the jam by the rescue, rushed straight to the parc fermé to get there on time. This hardly but succeeded but for that they had to finish the day without service and refuelling.

“There was no way to avoid the deep mud, and on top of that a because of a Polish crew tottering in front of us we couldn’t get momentum. 50 metres before the end of the marshy part HAWKIA lost the ground from under the wheels and the car sat up. We had shovel with us but it was impossible to dig ourselves out. The second part of the day we took easily, without struggling and forcing, because we knew we were short on fuel. I am very happy and proud that my guys put the car together so well that we had no technical problem throughout the day despite we ran without service.”

A surprise reamined also for Sunday. On the penultimate special the steering connecting rod broke and controlling the car gave trouble. At the finish of the special it turned out that the left ball socket broke half out. That’s why the crew Sólyom – Galbács didn’t take the start of the last special for safety reasons.

“However we enjoyed the sunny specials we had to quit because over 80 km/h it was impossible to keep the car on the track, we almost fell off in several corners. We didn’t want to risk an accident. I am very happy with Toolimpex Cup, altogether it was a fantastic event. I wouldn’t even mind to have two events per season in Nagykálló! And I am even happier with our results, especially when I take into account that We were classified among the 4000 cm3 vehicles with our 2000 cm3 engine and we had to compete with them. I would like to say thanks to all members of my team for their outstanding work at the opening round of the season, I am very proud of them!”

“All members of the team performed maximally, the rest was shaped by the fate and luck. I am extremely happy that we had such a good start into the 2013 season!”

Results of Sólyom Team at the Toolimpex Cup (Nagykálló, Hungary):

The venue and the date of the next round of the championship is uncertain because of the huge amount of water on the tracks. The Sprint event planned for April was postponed, the Kapuvár event  scheduled for May was cancelled by the organiser. As soon as we have some information about the next round we will publish it immediately on the official website of the team and on Facebook. 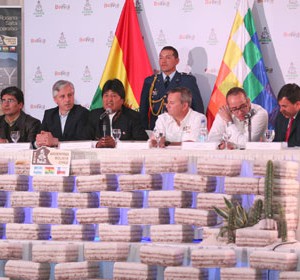 The Dakar World Tour came to Bolivia to stage the dress rehearsal for the rally's visit next January, when the country will...
Copyright 2011-2016 Rallyraid.net - RISE Network. All Right Reserved.
Back to top