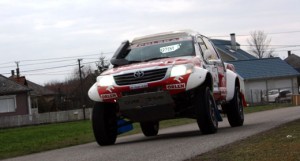 Adam Malysz finished first at the prologue of Toolimpex Cup, first round of The Hungarian Cross-Country Rally Championship and the Central European Zone Trophy. The Polish driver was only one second faster than Erik Korda. Among Bikes and quads, Károly Heiszer clocked the best time.

Adam Malysz won the prologue of Toolimpex Cup but he was only one mere second faster than Erik Korda who also races with an Overdrive Toyota Hilux. Another part of the story is that there was a mark in the roadbook that confused a lot of the crews and Korda lost at least four or five seconds there which proved to be decisive on this short track.

On the third and fourth place there was a dead heat, Pál Lónyai and Imre Fodor finished with exactly the same time. For Fodor (Overdrive Toyota Hilux)  this is the first race in almost four years. Also after a lengthy absence from cross-country rally tracks Pole Lukasz Komornicki, who decided to start in a cautious way, clocked the ninth time.

But even this short warm-up had some victims. Zoltán Hangodi finished 11th with his brand new T3 buggy “Klement Mosquito” but from the half of the stage he drove with a broken differential and later it turned out that he can’t continue the rally. Maciej Stanco from Poland had a roll with his Porsche Cayenne, and at the moment it’s unsure if he can go on tomorrow.

Among bikes and quads, Károly Heiszer was fastest of the day in front of Lajos “Laller” Horváth and last year’s bronze medallist in UEM European Championship, Richárd Hodola.

On Saturday teams complete six specials near Nagykálló, Biri, Balkány, Szakoly and Kállósemjén, the rally ends on Sunday with the prizegiving after four more specials. 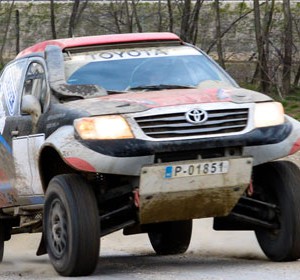 Strong field at Toolimpex Cup, first round of the Hungarian Cross-Country Rally Championship and the Central European Zone...
Copyright 2011-2016 Rallyraid.net - RISE Network. All Right Reserved.
Back to top