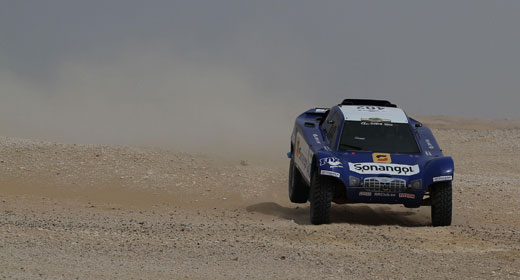 Frenchman Jean-Louis Schlesser, Spaniard Marc Coma and Poland’s Rafal Sonik maintained their overall leads in the respective car, motorcycle and quad categories after the second and longest selective section of the 2013 Sealine Cross-Country Rally in Qatar on Wednesday.

But the day’s stage wins fell to Schlesser, Chile’s Francisco Lopez and Emirati Obaid Al-Kitbe. “Nice to get the stage win again but we had a problem near the end,” said Schlesser, who extended his lead to over 35 minutes. “I stopped about 20km from the end. There was a difficult dune and it caught me by surprise. I could not start the car, so I waited for a few minutes and we managed to get going again.”

His closest rival Krzysztof Holowczyc also stopped in the soft sand for several minutes on the run north to the stage finish after overcoming an earlier time-consuming puncture, but he maintained second overall with the sixth quickest time. Poland’s Martin Kaczmarski, Venezuelan Nunzio Coffaro and Kazakh Aidyn Rakhimbayev were second, third and fourth on the day’s stage in three Overdrive Toyotas.

Local hero Nasser Saleh Al-Attiyah began brightly and was comfortably the quickest car driver until a stray stone damaged his Buggy’s oil filter after the first checkpoint and forced the disappointed Qatari out of the event.

“I hit nothing. It was just a stone that hit the oil filter and we lost the oil,” said a dejected Al-Attiyah. “We could do nothing other than to stop. On our Buggy the oil filter is low down and this can happen – on other Buggies, like Schlesser, it is higher up. Now we will try and carry out some testing while the team is here over the coming days.” 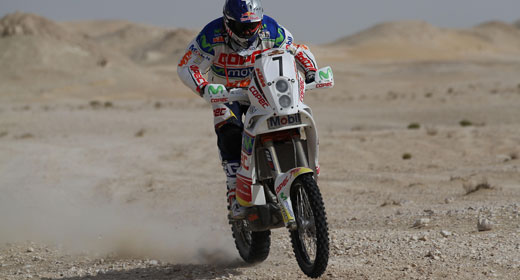 Marc Coma maintained an unofficial overall lead of just three seconds, despite being caught by his closest rivals on the tricky stage and running in convoy to the finish. Lopez won the special by 1min 39sec and retained fifth. Poland’s Jakub Przygonski and Norway’s Pal-Anders Ullevalseter were second and third and now hold fourth and third in the overall standings, with Paulo Gonçalves in second.

“It is never easy to push and make a lead when you are first on the road and you have difficult navigation,” said Coma. “It is easy for the riders behind to see the lines. I tried to push at one point and made an escape but I had to stop to fix a problem with my seat and lost about a minute. Tomorrow I start behind, so we will see.”

“It’s nice to win the stage but it was not so easy,” said Lopez. “This rally is much longer and more difficult than last year. It is a good test for me and the bike and good training with the navigation. The 30km of dunes at the end were nice but the pace was fast among the leading riders.”

Rafal Sonik was passed soon after the start by Obaid Al-Kitbe, but the Pole held on to take second among the quads on the day’s stage and he maintains a sizeable advantage heading into day three. Al-Kitbe duly claimed the stage win by over 34 minutes.

Reinaldo Varela and Gustavo Gugelmin, who had crashed their car heavily over a cut face dune near the end of Tuesday’s stage, were detained in hospital with both Brazilians suffering from compression fractures to their vertebrae. The incident bore an uncanny resemblance to the one that had injured Yazeed Al-Rajhi and Alex Winocq in the recent Ha’il Rally in Saudi Arabia.

Faisal Al-Attiya suffered a miserable first day in his powerful Hummer. After sustaining a puncture, the Qatari was forced to wait several hours for support and was unable to finish the stage. He started day two from 19th overall with massive time penalties.

Czech driver Miroslav Zapletal had stopped to assist the Brazilians at the scene of the crash on Tuesday and, as per the regulations, clerk of the course Pedro Almeida gave the 34 minutes back to the driver that had been lost at the incident. Zapletal restarted in third position.

Overnight leaders Coma, Sonik and Schlesser were first on the road in the motorcycle, quad and car categories, but Aidyn Rakhimbayev was awarded a 30-minute penalty before the restart for missing a waypoint on Tuesday and the Kazakh slipped from third to eighth overall in the car section.

Emirati Obaid Al-Kitbe was also awarded a penalty of 1hr 20min for missing five waypoints and he slipped to fourth in the quad order behind Sonik, Paulo Copetti and Mohammed Abu Issa. Minor three-minute speeding penalties were also awarded to Kaczmarski and Coffaro.

Coma and Goncalves pulled away from the chasing group through the early section of the stage, as Ullevalseter, Przygonski and Lopez trailed in their wake. The Spaniard and the Portuguese were locked in a classic game of cat and mouse but Lopez reached PC1 after 83.63km with the quickest virtual time. Gonçalves had managed to reduce Coma’s overall lead by 1min 41sec. The top five were well clear of the rest of the field and Al-Kitbe passed Sonik to lead the quads.

By refuelling, after 197.57km, the top five were running close together in increasingly windy conditions and Lopez maintained the advantage from Przygonski and Ullevalseter. Coma maintained a tiny virtual overall lead.

Lopez kept his stage advantage into PC3 and sealed the stage win with a time of 4hr 46min 23sec. All five front-running riders arrived within seconds of each other at the flying finish and Coma was fifth but retained the overall lead.

Running first on the road meant the added burden of accurate navigation fell to Schlesser, while Al-Attiyah was reseeded to fourth and promised the flat-out attack in his bid to catch the Frenchman. Predictably, the Qatari soon passed Zapletal and closed in and overtook Holowczyc before reaching PC1 4min 06sec faster than his Polish rival.

But Al-Attiyah was forced to stop again before the second checkpoint after breaking the oil filter and all his hard work was undone. The Buggy was towed back to the Sealine bivouac and Al-Attiyah is hoping to carry out some testing in the coming days with a second Dakar-spec engine installed in the Buggy.

Schlesser was the quickest driver into PC2 and PC3 and reached the stage finish 8min 52sec quicker than Kaczmarski to extend his overall lead. Coffaro and Rakhimbayev finished third and fourth, but Holowczyz spent vital minutes trying to free a damaged tyre after the wheel got caught on a brake caliper.

Competitors tackle the penultimate selective section of the event on Thursday – a 407.10km timed test that starts 3.93km from the Sealine camp and finishes just 1.13 km away. Again the route uses a vast array of different terrain, including dunes, fast tracks, rocky trails and sandy piste, with the emphasis on accurate navigation. 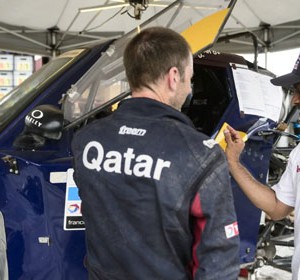 Nasser Al-Attiyah was forced to retire on the second stage of the Sealine Cross Country Rally after a stone punctured the oil filter...
Copyright 2011-2016 Rallyraid.net - RISE Network. All Right Reserved.
Back to top