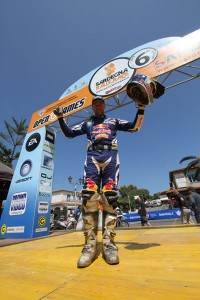 2010, 2011 and now 2013. Marc Coma won for the third time the Sardegna Rally Race, invariably with the KTM, and becomes the absolute record holder. The Spaniard has won the race with a lead of more than seven minutes on the Portuguese Paulo Gonçalves, who made his debut with a Honda of the Team HRC. In third place, a trifle late, the other Spanish Joan Pedrero, in the race with a Beta of Italian Dirt Racing Team.

Coma went straight to the top by winning the first leg from Alghero to Arborea, has given the way to Alessandro Botturi at the end of the second, came back in the lead at the end of the third stage, and stay there until the end of the Rally. In total, the Spaniard has won three selective sections and two stages, and owes its exceptional performance to the highest concentration, which has guaranteed him the minimum errors rating and the perfect alignment with the difficulties of the race, with particular reference to the navigation. Unlike its rivals, which have alternated excellent days to other even disastrous, Coma has maintained a profile perfectly homogeneous, limiting the attacks and preferring a kind of natural selection in determining the outcome of the Rally. Yet another masterpiece of class, strength and experience goes right in the anthology of the Riders of Avià career. 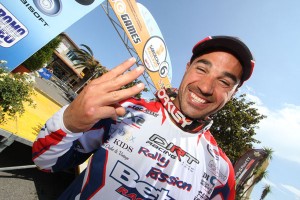 There were also a very interesting fight for the remaining two places on the podium, which involved six Riders in the enclosed space of a few minutes, and that was resolved only at the end of the last stage. Paulo Gonçalves, Joan Pedrero, Cyril Despres, who made his debut with Yamaha, and Italians Alessandro Botturi, Andrea Mancini and Paolo Ceci, following the final order of arrival, took part in an exciting selection. In particular, Botturi gave the feeling of having already acquired the necessary pace to compete in the Great Rallyes. The Giant of Lumezzane has managed in such a short time to gain the necessary experience to extricate himself in the difficult art of navigation, and the difficult Sardegna Rally Race has provided a clear evidence of it. Botturi, who won three special stages and two legs, had his big break chance during the fourth and penultimate stage, when he was very near to a resounding success, then thwarted by a fuel problem just a few meters from the end of the stage .

As third on the podium in San Teodoro, Joan Pedrero has provided the evidence of being able to do it without the umbilical cord that bound him to Marc Coma with the degree of water carrier. Pedrero joined the Team Beta Dirt Racing at the very last moment, won three specials tests and a stage, the third, and only sold in the final second place to the Portuguese Gonçalves. The latter conquers his third runner-up in the three World Rally he played so far, and remains the only potential rival of Marc Coma who is the provisional leader with three wins.

The last selective section of the race, over two hundred kilometers long, has completed the range of scenarios and technical situations offered to the participants by the Sardegna Rally Race. After the mountain slopes, the long rides along the sea and the very wide range of weather conditions, the final stage was certainly smoother and faster than the previous ones, and with much less navigation difficulties. Coma has “explored” it for a good part of its development, but finally Alexander Botturi was the winner of the last test of the Sardegna Rally Race 2013 edition.

The Rally, created by Antonello Chiara and Gianrenzo Bazzu six years ago, is a magnificent event, and probably one of the most complete of the discipline. Its atypical configuration contains an incredible number of consents, which are the source of its record and its prerogatives. The rest, ie the maximum of her dowry, is Sardinia. 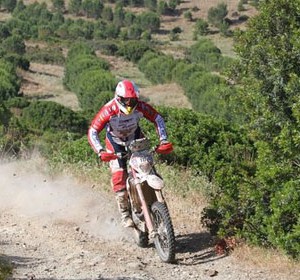 Another day, another step, and another scenario, both environmental and competitive at the Sardegna Rally Race 2013. The third...
Copyright 2011-2016 Rallyraid.net - RISE Network. All Right Reserved.
Back to top