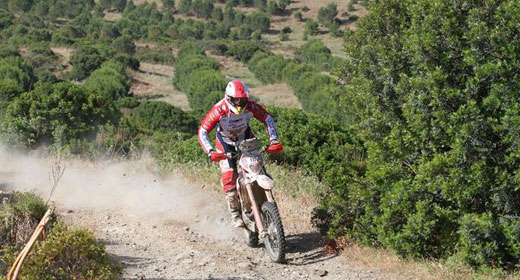 Another day, another step, and another scenario, both environmental and competitive at the Sardegna Rally Race 2013. The third stage comes back in Arborea, the city where the rally had left the day before to face the long marathon stage, but on a different track. On the ground, it is the turn of the Sulcis mining area, with is pearl, the ghost town of Ingurtosu, and the zone of the incredible dunes of Piscinas. From the competitive point of view, there are two more selective sections, the first of 117 kilometers, the second shortest, of 57. Both are very demanding, and with the now usual large dose of great navigation, that weighs like a sword of Damocles over the heads of the competitors.

It is the day of Joan Pedrero, the “young and beautiful” Rider that was the “water carrier” of Marc Coma. In Sardinia Pedrero was 9th last year, and fot this edition of the Rally he signed a one-race agreement with the Dirt Racing Team of Paolo Machetti that has made available for the Spaniard a specalliy prepared new Beta. Joan is repaying the kindness with the best currency at its disposal, the results. After a one stsge period of adaptation to the bike, the Spaniard started winning the second selective sector of the second stage. I the todays stage Pedrero started from the seventh position, and decided not to worry about the general classification and to focus on the outcome of the day. Pedrero played his options in the best way, and won both the special tests. The double win also applies to the whole leg, and to a coherent position in the overall standings, which sees him now in fifth place overall.

Daring turnover in the lead, however, and the situation changed again and, as it was fairly predictable, promotes Marc Coma. He obviously delegated the task of opening the track to Botturi, the winner of the previous stage, and focused on one of the easier and more manageable formulas of its incredible repertoire, that one to properly administer the theoretical advantage. With his unparalleled experience, the Catalan did not commit any error, and merely controlled the entire commitment at a rate of security. Second overall in the first special test, and sixth in the final one, Coma not only comes back in the lead in the Rally, but slightly longers on rivals, still Despres and Botturi, which drops to third place.

If Despres was not so lucky, certainly the award of bad luck goes to Alexander Botturi. The Italian, who started first in the opening special test of the day, carried out his task with the diligence of a bulldozer, limiting the damage and finishing in eighth place but with a small delay only. Determined to repeat the strategy in the second selective section, Botturi had to give up due to a failure of the trip master, the odometer in the “rally racing”. Botturi stopped and repaired, but was not able to perfectly synchronize the instrument again, and soon after loose the right way. This cost him more than six minutes. At the end of the special test Botturi was only fifteen and, above all, not the leader of the Rally anymore. Of course, Botturi now can count on a favorable starting order in the next stage, but if he wants to subvert the order of things, really he have to attack.

For this “target” the Sardegna Rally Race offers him the perfect land. The fourth stage of the Rally, in fact, from Arborea and Sa Itria of more than 300 kilometers, including over 200 km of special stages. Who knows that the Italian will not be able to again subvert the overall situation, and to get as an authentic hero in Sa Itria, the place where Bike Village has already set the more famous “bivouac” of the World Cross-Country Rally. 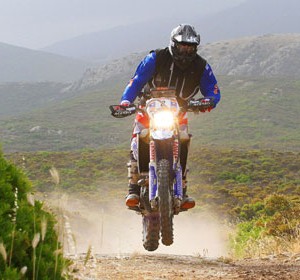 Alessandro Botturi gets rid of the uncertainties of his youth "Pilot Career" and fits better and better to the target. Here...
Copyright 2011-2016 Rallyraid.net - RISE Network. All Right Reserved.
Back to top