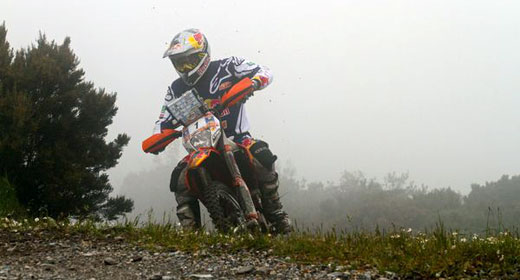 And suddenly everything becomes deadly serious. The two previous days spent “loosely” between technical and administrative checks, the Prologue that is an infinitesimal part of the whole effort, in short, it was almost like a vacation. Then suddenly the 74 competitors found themselves located in a 367 km long day, with two selective sections not so long, but difficult, complicated. It was cold, at least in the morning when the first stage took its start from Alghero’s seafront, and in the middle of the day the Riders had to meet also the fog. Finally, there is now the sun in Arborea, who seems to have taken over, and it is clear that things can be owned in a different manner.

The first SS kicks off not far from Ozieri. 60 kilometers. It’s now time to immerse in the Sardegna Rally Race, the real one! Is Marc Coma who takes the initiative. The Spanish has decided to attack immediately the Rally, and won the first special test in front of Paolo Ceci and Ruben Faria. The gaps are minimal, fifteen and thirty seconds. Cyril Despres was fourth, and behind the French are Mauro Uslenghi and Alessandro Botturi. The slopes are often covered by vegetation, very lush due to the abundant and incessant rains, and therefore difficult to find. For Alex Zanotti and Andrea Mancini, who open the track, the task is delicate. Italians are not wrong, but they can be traced with relative ease, and that’s the reason because the job of Mark Coma becomes relatively easy.

Four kilometers after the point of Assistance, located at San Leonardo, begins the second special stage of 52 kilometers. Still focused on navigation, the test becomes more technical because of the tracks are increasingly narrow and bumpy. The result, however, does not change, and with a second victory Marc Coma leaves the colleagues in the rear field.

Coma run with the same bike for over a decade, the KTM that Spanish has greatly contributed to the growth. So the feeling is perfect. Should cause a little surprise, then, that Cyril Despres, that’s debuts with his new Yamaha YZF 450, has in fact “held” beyond expectations. Two elements flow into the great result of Despres, fourth and third in the two special tests and now  in the second plece overall, less than a minute behind Coma. The first element is the talent of the French, indisputable, and the second becomes at this moment its great adaptability, in this case to a motorcycle just met. It goes without saying that the Yamaha must already be at a level more than good.

This is the life of Champions, the factory riders who have great responsibilities and great privileges, both deserved. Different, and arguably more “hard”, is the life of those pilots who are not (yet) arrived at that level. And that is the terrible life of all. Today we refer to that of Alex Zanotti, first overall in the Open category, whose task prize was to opening the track today. It was tough – admits the strong Pilot San Marino – For most of the morning I was alone, always looking for a track that I could not find in the high grass. I have had many thoughts and once I even took the wrong road. Upon the finish of Arborea I was tired, mentally and physically. But I must say one thing: at one point I came out of the woods and I found myself in front of a verdant plain. It seemed to me to cross an ocean of grass. Magnificent. They are the extraordinary sensations that only a Rally like this can give! “ 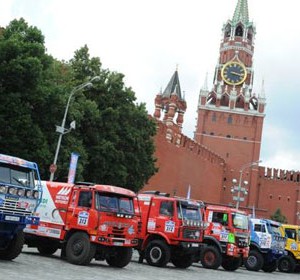 With some 30 entrants in the truck category, the Silk Way Rally is the must do race of the summer. The top teams : MAN VEKA,...
Copyright 2011-2016 Rallyraid.net - RISE Network. All Right Reserved.
Back to top