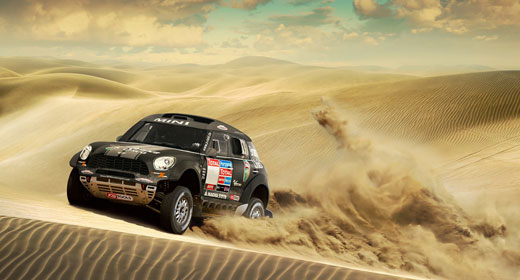 At the end of a one-month rally break, the Monster Energy X-raid Team is going to travel to Argentina, next week. There, the pairings Nani Roma (ESP) / Michel Périn (FRA) and Orlando Terranova (ARG) / Paulo Fiúza (POR) are going to compete in the Desafío Ruta 40, with two MINI ALL4 Racing. The Rally will start on 16th June in San Salvador de Jujuy and takes the field southwards, along the Andes. On 22nd June, the rally will be finished in San Juan.

Over the course the event’s six stages, the teams will have to cover a total mileage of 3642 kilometres, with the special-stage mileage amounting to 1979 kilometres. The Ruta 40 is regarded as good preparation for the Dakar Rally as some of the stages will be held in regions that also will be a part of the 2014 Dakar Rally, next January.

With his MINI ALL4 Racing, Roma already won the Abu Dhabi Desert Challenge in early April, this year. Terranova and Fiúza will race the Ruta 40 as ‘reigning champions’. For them, it’s the first rally they are going to contest for X-raid since the Dakar in January. There, the Argentinean finished fifth and in addition, he was the first South American ever to win a special stage in the legendary event’s car category.

The route of the Desafío Ruta 40 takes the field along the N°40, Argentina’s longest and most spectacular national road. It features a total length of 5,200 kilometres, from Cabo Vírgenes in the province Santa Cruz to La Quiaca at the heights of Jujuy. It scales to more than 5,000 metres above sea level, passes 236 bridges and crosses the Andes 27 times.

“I’m really looking forward to the Ruta 40,” says Monster Energy X-raid Team driver Nani Roma. “Argentina is a great country and this rally represents a very good preparation for the Dakar. Following my win in Abu Dhabi I want to also give my very best in this event to celebrate my second win of the season.” 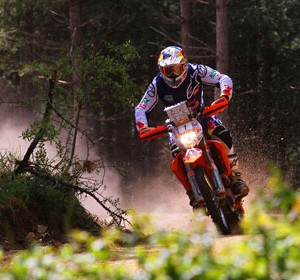