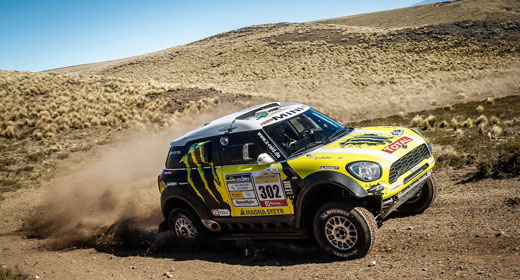 In the Desafío Ruta 40, the two MINI ALL4 racing pairings Nani Roma (ESP) / Michel Périn (FRA) and Orlando Terranova (ARG) / Paulo Fiúza (POR) proved to be just invincible. The two X-raid pairings secured all the five stage wins and on Saturday afternoon, Roma crossed the podium in San Juan with his yellow MINI ALL4 Racing as winner of the event. Meanwhile, Terranova celebrated a successful debut at the wheel of the Branca Unico MINI ALL4 Racing. The Argentinean finished second, just 2.05 minutes behind Roma.

The two final stages in Argentina’s San Juan region again proved to be extremely challenging. On day five, the competitors had to cope with a two-part special stage – featuring distances of 133.09 and 231.51 kilometres respectively and split by a 91.14-kilometre liaison section. At first, the competitors had to cope with dried-up river beds, narrow roads and big rocks – and then, they were sent into the mountains where they had to tackle hairpins galore and gravel. Roma finished the first part of the special stage with a 14-second lead over Terranova and when the special stage was over, he had extended this lead to 2:28 minutes.

On the final day, the drivers once again had to give their very best: throughout the 146.23 kilometres on a twisting, sandy track with Fech-Fech sections, they needed maximum concentration. In addition, the special stage also featured dried-up river beds, salt lakes and fast sections. Terranova proved to be extremely quick and gained more than four minutes on Roma – but the latter succeeded in securing the overall win, nevertheless. 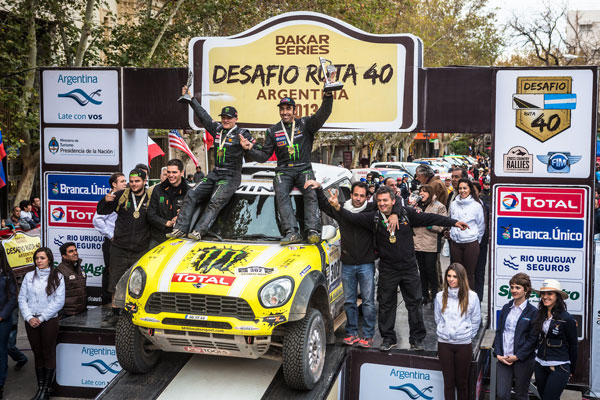 Nani Roma: “What a tough rally. Some of the days were extremely long and the special stages likewise demanding. We tried to avoid taking too big risks and opted for consistency, instead. In the fifth special stage we could push – slightly – and gained some minutes. Today, on the final day, however, we opted for a more conservative approach. We had a comfortable lead and didn’t want to make a mistake in the final stages. I’m delighted to have won this rally against a rival as competitive as Orly.”

Michel Périn: “I’m so happy about our win. The Ruta 40 really resembled a small Dakar. The terrain was difficult and the days were long. On some days we started early in the morning to return to the bivouac very late in the evening. A really good preparation for the Dakar in January.” 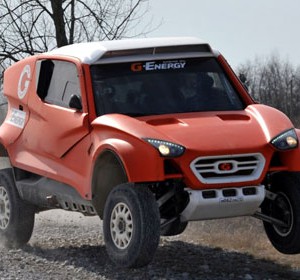 Some teams are lucky enough to only fight their battles in the dirt and dust of some of the most inhospitable places on the planet,...
Copyright 2011-2016 Rallyraid.net - RISE Network. All Right Reserved.
Back to top