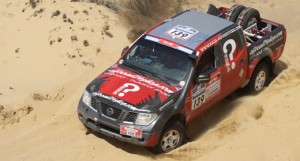 As the summer is approaching a new edition of Silk Way Rally is knocking on the door. Like in previous two years a Raid Adventure Team’s crew of Juraj Ulrich (pilot) and Daniela Ulrichová (co-pilot) is going to face the demanding rally again this year. After a year lasting preparations on July 1st the team will depart to Moscow where on July 4th they will undergo technical and administrative inspections. The ceremonial start takes place on Friday July 5th on famous Red Square.

For more than 100 competitors in race waits a 4.096 kilometre long track from Moscow to Astrakhan including 2.821 kilometres of selective sections. Compact format of seven stages will take competitors to places like Tambov, Volgograd and Elista. Raid Adventure Team will fight for a podium place with about twenty rivals in group T2 (production cars). In the last minutes before leaving to Russia the team is fine-tuning all the details, even the smallest ones in order to reach the desired goal.

Next week, the car and truck teams entered in the Silk Way Rally head to Luzhniki Olympic Stadium in Moscow for the administrative...
Copyright 2011-2016 Rallyraid.net - RISE Network. All Right Reserved.
Back to top